Sixty-two short stories told by 165 legends. That's ESPN's quick pitch for the sports network's new 10-episode, 20-hour epic mosaic of the history of basketball, Basketball: A Love Story. Peabody Award-winner Dan Klores directs this unfathomably comprehensive series, which, at the very least, promises to whet every hoops fan's appetite as we wait for the start of the new NBA season. 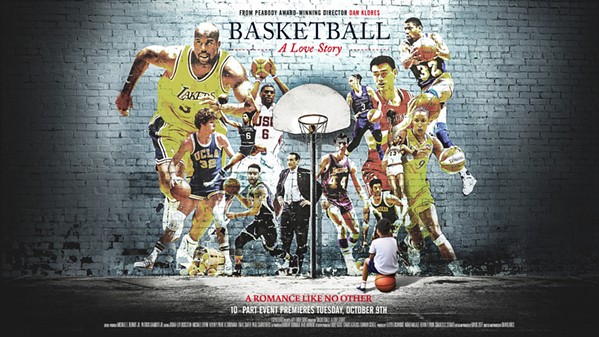 To Klores' credit, it does much more than that. From the sport's very early origins to its evolution into one of the most popular games in the world and a multi-billion-dollar industry, this doc doesn't seem to leave any basketball-shaped stones unturned. To make the 20 hours of content somewhat digestible, the series is split into 62 clips that are bunched into 10 episodes. Each video has its own title: "Love of the Game," "Origins," "Title IX: Immaculate," "One and Done." Together, they aim to tell the tale of one sport, the characters and events that have shaped it, and the way it's influenced and intersected with society and history.

What's particularly cool and unique about this series is its inclusiveness: We get episodes about the WNBA (Women's National Basketball Association), the ABA, and the college and international game. In that same vein, there are diverse voices represented, adding power and credibility to it, especially in the more philosophical episodes about the world's ineffable mania for hoops. Men and women, young and old, players and coaches, journalists and commentators—they're all present, creating authentic and poignant meditations on the game.

As you flip from episode to episode, Basketball: A Love Story ebbs and flows in its scope, from the hyper-specific to the birds-eye view. One episode chronicles the Boston Celtics-Los Angeles Lakers rivalry; the next is about the NBA's first lottery draft. That shifting around, though artful, at times feels herky-jerky and difficult to roll with. The nice thing for a viewer looking to binge episodes, though, is you can pick and choose which ones to cue up. The titles give you a sense of what to expect.

As far as format, Klores and the doc's editors skillfully weave together their exclusive interviews for the series, historical interviews, game footage, and other interesting clips that span decades. Basketball junkies (like me) will be glued to these episodes, no doubt, and they'll most appreciate the nuances, inside jokes, league conspiracies, etc., that bind basketball culture together. While the casual fan or outsider's eyes may glaze over at points, I think the doc holds together as a balanced, self-aware piece that could lure viewers simply interested in American culture, history, race relations, business, and media.

In ESPN's press materials on the documentary, Klores is quoted saying he'd wanted to make this series for years and even pitched it to the network a decade ago: "The game, for me and others, has been an escape, a chance to pretend, feel safe, learn, love, lose and even despair," Klores said. "It has an obsessive quality to it ... and to me, 'obsession' is a form of love, so in a real sense each of these stories touches upon that feeling." That passion certainly bleeds into Basketball: A Love Story. Now let's tip off the 2018-19 season, already! (10 episodes, two hours each) Δ