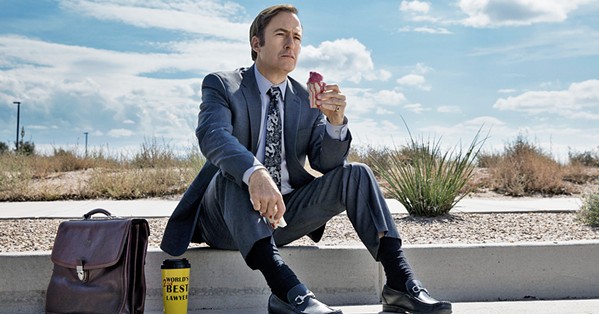 Prequels and sequels normally trigger big red flags in me. They seem to be, on the whole, made usually either as hollow cash cows or unwise attempts at rekindling the magic of an original movie or TV series. So, to be frank, my initial reaction was cynicism when Better Call Saul, a prequel to Vince Gilligan's masterpiece, Breaking Bad, went on the air in 2015. I passed at the time, not wanting to spoil my warm, fuzzy feelings for the original.

But I should've known better: Gilligan, who teams up with Peter Gould this time to chronicle the life of Albuquerque lawyer Jimmy McGill (Bob Odenkirk)—who we know later becomes Walter White's shady smooth-talkin' fixer in Breaking Bad—is simply one of the best storytellers in television. In astonishing and impressive fashion, Gilligan and Gould succeed at not only making a worthy prequel but also creating a series that easily stands on its own and that actually has more depth and nuance than its predecessor.

When we meet McGill, he's a struggling lawyer in the early 2000s, at this point better known for his antics as Slippin' Jimmy, his former con-man moniker. He lives in the shadow of his über-successful older brother, Chuck (Michael McKean), a founding partner of prominent Nevada law firm Hamlin, Hamlin, & McGill (HH&M). Jimmy wants to get on the up-and-up with his own private practice but continually finds himself resorting to criminal or fraudulent tactics. Desperate for cash at the beginning, he gets the idea to stage personal injury cases with a couple of willing skateboarders. Instead he winds up entangled with the grandma of a gang leader, who spares their lives only thanks to his remarkable wit and ability to negotiate out of backed-in corners.

Meanwhile Jimmy also plays the role of devoted brother to Chuck, who's on an extended leave from work due to a "condition" where he believes that he's "allergic" to all electricity. Crazy as it sounds, Jimmy regularly and dutifully brings food and supplies to his dark, shuttered home. Chuck isn't Jimmy's only tie to HH&M: He's also secretly dating an attorney at the firm, Kim Wexler (a tremendous Rhea Seehorn), who serves throughout as Jimmy's voice of reason and his liaison between the aboveboard legal world and the ethically nebulous space he operates in. Ultimately, Jimmy's drive to survive and succeed, in concert with his genuine talent at law, eventually elevates him to working with his bro on a big-time case—but there's many a twist to come.

Similarly to Breaking Bad, where we witness a passive high school chemistry teacher devolve into a Machiavellian drug lord, Better Call Saul portrays the tragic trajectory of characters slipping deeper and deeper into criminality and corruption. Also returning from Breaking Bad is retired cop Mike Ehrmantraut (an amazing Jonathan Banks), who's given his own downward character arc that just feels destined to merge with Jimmy's.

In my view, no one in television is exploring the hazy lines of morality better than Gilligan. Characters you'd think you would root against, you find yourself rooting for, and vice-versa. Every actor turns in fantastic performances, with Odenkirk leading the way as the one-of-a-kind Jimmy McGill, who charms as much as he infuriates over the course of this captivating journey. (Four seasons, 41- to 60-min. episodes) Δ