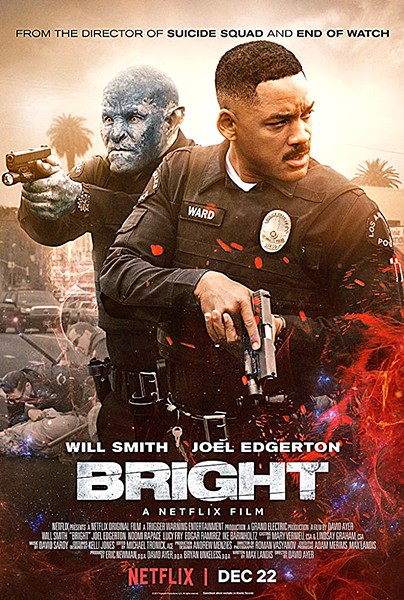 As 2017 came to a close, it's not hard to argue that the year was a boon for excellent original streaming content, particularly on Netflix

Without the aid of a Google search, I can easily fire off a slew of amazing original series and movies the big red giant released this year, including season two of Stranger Things, David Fincher's gloomy serial killer saga Mindhunter, Marvel's Punisher, and foodie favorite Chef's Table, just to name a few.

One late entry to that list is the buddy cop/fantasy mash-up Bright. Directed by David Ayers (best known for 2016's Suicide Squad), the movie chronicals the life of two cops working in a gritty Los Angles where humans live shoulder-to-shoulder with Tolkienesque fantasy races like orcs, elves, and fairies. In this world magic is real, and society is highly stratified, with wealthy elves essentially running things, orcs living in poverty and oppression due to discrimination against their race, and humans more or less caught in the middle.

The story itself follows human Daryl Ward (Will Smith), a down-on-his luck LAPD officer who's been partnered with the department's first orc police officer, Nick Jakoby (Joel Edgerton). The movie follows the unlikely partners as they delve into the city's underworld to save a young elf girl who has stumbled upon a powerful (and very illegal) magic wand that will grant any wish, making the trio a target for crooked cops and criminals alike.

The colliding of two unlikely genres shouldn't work, but it is actually what makes this movie so fun to watch. The tone is something akin to taking gritty action cop films like Lethal Weapon and Training Day and adding a dash of Lord of the Rings. The movie doesn't spend to much time boring you with lore and background about how such a world came to exist, instead telling just what you need to know to keep up with the plot while delivering on lots of shoot-em'-up action and entertaining back-and-forth between the two main characters. Both lead actors really shine in their roles, with Edgerton playing Jakoby as a goofy, rule-loving boyscout to Smith's rule breaking, streetwise badass Ward.

That's not to say that the film doesn't have its downsides. The dialogue can get a little hokey and clunky, though the actors do their best to overcome it. The movie also uses the fantasy elements, particularly the plight of the orcs, as social commentary on racism. While there's nothing wrong with that, the film is pretty ham-fisted about it, which sort of takes away a lot of the power out of that commentary. At times it feels more like a cheesy after school special than a thoughtful reflection of America's fraught history of racial tension. It's a complex issue to tackle, and I'm not sure Bright really gives such a subject the due diligence it deserves.

There's also the matter of the movie's writer, Max Landis, who has recently been accused of sexual assault. The relative success of Bright has once again raised questions about the morality of supporting art created by someone accused of such a horrendous crime, and viewers will have to decide if Landis' involvement plays into their opinion of the movie itself, or even if they want to watch it.

Those prickly issues aside, Bright is an entertaining movie with an interesting premise but not much else going on under the surface. There's really nothing wrong with that, as sometimes that's all we are looking for in a movie. After watching it, I am definitely curious to see what Ayer will do with the recently announced sequel. (117 min.) Δ