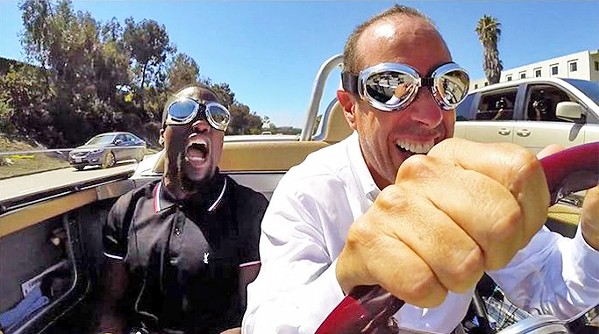 Jerry Seinfeld's comedic lens of the world is refreshingly, and even enviably, simple. And such is the appeal of the sitcom legend's successful Netflix series, Comedians in Cars Getting Coffee. For those unfamiliar, this show has the most rudimentary premise possible: Seinfeld picks out a cool vintage car, picks up a celebrity (usually a comedian), and drives to a coffee shop where they chat about show business and life. Rinse and repeat. It's a little bit like a video podcast, interspersed with striking shots of cool cars, city streets, and anonymous baristas making cappuccinos. The episodes are super digestible—as short as 14 minutes.

With its barebones framework, Seinfeld's delightful but admittedly snobbish brand of comedy has the space to thrive. He's rich, he's clever, he's composed, he doesn't seem to have a worry in the world—and he's not going to apologize for it. It's a sage arrogance, a "been-there-done-that" attitude that makes Seinfeld compelling but also bristling.

This tone makes for interesting conversations, which is why Seinfeld's banged out 10 seasons of cars, comedians, and coffee. Past seasons of the show were a mixed bag; some episodes were funny and insightful and some were just dull. The recently released 10th season has some of the most compelling episodes to date. Seinfeld argues with Zach Galifianakis in the opener about whether life changes after becoming a celebrity: "That's all your perception," Seinfeld says. "The world has not changed that much because people know who you are. There's too much world." In another episode, he and Ellen DeGeneres debate how much concern they should feel about the state of the world. "The world is such a scary place right now. It just overwhelms me with dread. Do you ever go to those places?" DeGeneres asks, to which Seinfeld responds: "No. My attitude is that each generation kind of gets this thing dumped in your lap to deal with."

Some critics have panned Seinfeld for essentially embodying white privilege and not caring enough, or not doing enough satirical analysis of the pressing issues of our time. But that's not who Seinfeld is, or ever was, as a comedian. He's a pure observationist, finding humor in the simplest aspects of people and society. His passion for the art of comedy comes through intensely in the emotional final episode with Jerry Lewis, which marked Lewis' last on-camera appearance before he died in 2017.

Whether you love him, don't get him, or find him distasteful, Seinfeld is distinctly who he is. And it's why Comedians in Cars Getting Coffee brings a lot of value to the TV landscape. (12, 14 to 23 min. episodes.) Δ