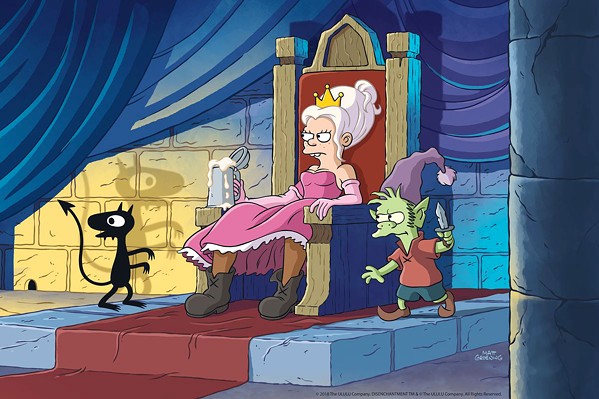 There is nothing in the world that I love more than a great animated sitcom. Starting with The Simpsons, I was hooked on binging my favorite animated comedies over and over and over and OVER again until I wore out my VHS (yes, I'm old). One of the best of all time was, of course, Futurama, also the brainchild of Simpsons' creator Matt Groening. When Futurama finally left the airwaves after a tumultuous canceled-revived-canceled-revived back-and-forth, there really seemed to be an empty spot in the animation landscape.

Thankfully, Groening has returned to form with Disenchantment, a bold and quirky look at fairy-tale tropes. The show features Princess Tiabeanie Mariabeanie de la Rochambeau Grunkwitz, aka Princess Bean, who rejects everything about her life as a princess in favor of drinking, gambling, bedding hot dudes, and committing minor acts of grand theft here and there. In the first episode, she meets Elfo, an adorably twisted elf who longs to break free from his elfish life where everyone is supposedly "happy" all the time. Elfo wants to be miserable, and he quickly finds that misery when Bean's father, King Zog, and his court wizard, Sorcerio, seek to drain his elf blood, which supposedly holds the secret to everlasting life.

Bean is a motherless child raised by her father. He's married to his second wife, a hilariously doped up lizard creature (although don't say that to her face) named Queen Oona, who has birthed the king's only son, Bonnie Prince Derek. Luci plays a weird demon cat who has been sent by a mysterious coven to watch over Bean (there's a long-running mystery that sort of pays off in the last episode), and he works great as the evil foil. But it's Bunty, Bean's chambermaid, who absolutely steals the show with her lines and running gags.

The writing is pretty typical of what you would expect on shows like Futurama. There are plenty of crude jokes and humor that play off Bean's budding awkward adolescence and the interplay of the three main characters. Bean and Elfo have a lot of chemistry but the show really excels when it lets Bean off the reins and out of her stereotypical anti-girly-girl role. Bean is heroic, smart, and, most of all, loyal to her friends. The show will trick you into thinking it's a throwaway jab at fairy tales and our modern propensity to roll our eyes at them, but it's at its core a sweet kind of innocence that will absolutely break your heart by the end. (One season, 10 episodes) Δ