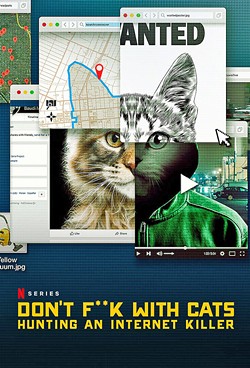 Everyone loves true crime. Just admit it, you love it. Or at least you don't hate it. Sure, it can be gruesome and voyeuristic, but deep down I think everyone loves a good mystery that needs solving.

In Don't F**k With Cats, you get to watch average people just like you and me get the unusual opportunity to crack a murder case, which itself is unusual in all sorts of other ways too.

Within three hour-long episodes, a Netflix documentary crew follows a group of concerned citizens who connect on Facebook after watching a disturbing viral video online. In the video, which was posted online in 2010, an anonymous creepo murders kittens (real, tiny, adorable kittens!) by suffocating them in a vacuum sealer.

It's repugnant, and it lights a raging fire of passion for justice—or maybe vengeance—in the bellies of several innocent internet onlookers, who form a Facebook group dedicated solely to finding and apprehending the video's creator.

The group gains a huge following (thankfully, there are a lot of people out there who find animal abuse abhorrent) and eventually even attracts the attention of an apparently popular reality TV show about a group of bikers who find and beat up animal abusers. Niche, right?

But behind all the media and social media chaos are two web nerds who truly want to find this guy, and they have the skills to do it. As these two get closer to finding the cat killer, more horrific videos begin to surface. In one, the killer drowns more kittens in a bathtub. Then in another, he murders a human being.

Things only escalate from there—threats are made directly to the online investigators; body parts are mailed to Canadian politicians—and the Facebook group members struggle to get law enforcement to take their investigation seriously.

It's a crazy story with a lot of twists and turns, and with just three episodes, it makes for a fast-paced and engaging watch, despite some questions left frustratingly unanswered. And, in case you're wondering, it does not show the actual footage of kittens dying.

The documentary mini-series also brings up some interesting ethical questions. The killer in this case, like many serial killers, is really in it for the rush of the chase and the worldwide attention. He only escalates to murdering people after he gets so much notice for his initial cat-killing video.

If this group of well-intentioned individuals hadn't banded together on the mission to find this killer, would a man still be dead? If today's world weren't so obsessed with blood and gore, would there be less?