Where? Streaming on Comedy Central and Hulu

I haven’t seen all the episodes of this unusual series, but I’m willing! The premise is pretty funny. An inebriated comedian recounts a piece of American history as actors reenact the story, lip-syncing dialog. Yes, it’s as silly as it sounds, and, yes, it’s also strangely compelling.

The idea started as skits from the Funny or Die series created by Derek Waters and Jeremy Konner, and the first skit aired on Aug. 6, 2007, and featured narrator Mark Gagliardi chronicling the Burr-Hamilton Duel with Michael Cera cast as Alexander Hamilton, Jake Johnson as Aaron Burr, Ashley Johnson as Hamilton’s wife, and Derek Waters as Thomas Jefferson. Most of the fun is hearing the drunken narrator’s voice coming perfectly lip-synched out of the actors’ mouths, even when he or she is slurring or stuttering. 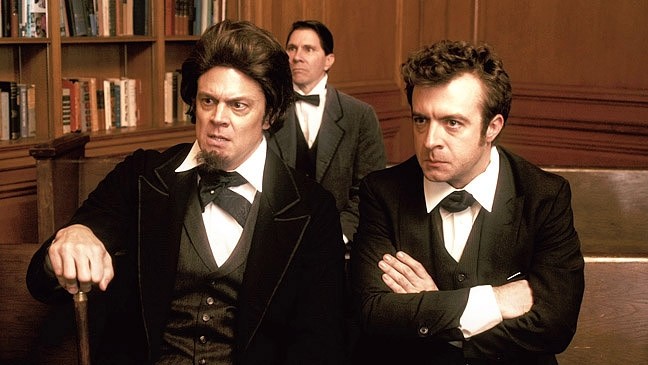 After a 2 1/2 year hiatus, the skit became its own thing when Drunk History the series debuted in July of 2013 with Ferrell and Adam McKay as producers. It ended its third season in November of 2015.

While many of the early skits covered history people know well, subsequent episodes have delved into fairly obscure moments, so viewers might actually learn something while being entertained. Though there’s a near-endless supply of history, as it delves deeper into less known moments, the series may be in jeopardy: Comedy Central has yet to renew it for season four, but I’ve got my fingers crossed!

It’s also a non-chronological series, meaning it doesn’t matter in what order you see the episodes. One moment you’re witnessing the rise of Dolly Parton’s (Casey Wilson) career; in another episode you’re learning about the rivalry between Harry Houdini (Ken Marino) and Arthur Conan Doyle (Alfred Molina).

And to really make it fun, you can join the narrator and get your drunk on. Of course, if you do that, though you may learn something, you may also forget it.