Ben Stiller directs this seven-part TV mini-series based on the true story of Richard Matt (Benicio Del Toro) and David Sweat (Paul Dano), who conspire to escape from a maximum security prison with help from their lover, Tilly Mitchell (Patricia Arquette), a civilian who runs the prison's sewing shop. 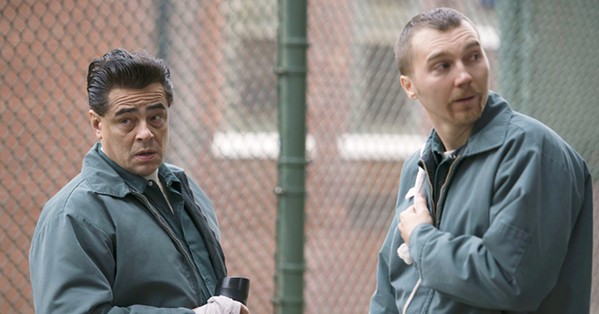 The gritty, masterful escape thriller was shot on location at the Clinton Correctional Facility in upstate New York, the facility where the actual escape took place, which adds to the realism of this engrossing story that feels more like a character study of its five principals than anything else.

In addition to Richard, David, and Tilly, we have Tilly's husband, Lyle (Eric Lange), a maintenance worker at the prison, and escort guard Gene Palmer (David Morse). Bonnie Hunt stars as Catherine Leahy Scott, the New York state inspector general, who questions Tilly about her role in the escape.

Some viewers might find it a bit slow with its seven approximately hour-long episodes, but that time allows the characters to fully develop and the audience to get an idea of just how patient and hardworking the inmates were in their long and difficult escape.

Tilly's clearly unhappy in her marriage—conniving but not too smart. In fact, the only character who seems less intelligent is her husband, Lyle, who tries to make Tilly happy but literally has no clue. In contrast, both Richard and David are crafty and devious.

One thing becomes abundantly clear: Like the inmates, Tilly, Lyle, and escort guard Gene are as much prisoners in their jobs as the inmates, and in Tilly and Gene's case, they make the terrible mistake of befriending Richard and David. Gene is wowed by Richard's artistic abilities and trades him favors for paintings.

The film and its setting is hard, cold, muted, and oppressive, and after the inmates escape by painstakingly sawing through steal walls, steam pipes, and more, the outside world is no more forgiving as they try to make their way to the Canadian border. It's a harrowing tale of desperate people—both the literally imprisoned and those metaphorically imprisoned by their dead-end lives.

Arquette, who won Best Actress at the ninth Critics' Choice Television Awards as well as a Best Performance by an Actress Golden Globe award, is nothing short of amazing as Tilly, fully disappearing into the role. Her Tilly comes off as a shallow narcissist, and it's worth noting that the real Joyce "Tilly" Mitchell, in an interview from Bedford Hills Correctional Facility where she's serving time for helping the inmates escape, criticized the mini-series. Of Stiller she said he's "a son-of-a-bitch liar just like the rest of the world. He doesn't care about the truth. All he cares about is making millions off me. He's an idiot."

That probably means Stiller got it right. Δ