Good luck trying to find the '80s Showtime series Faerie Tale Theatre anywhere other than YouTube or on a hard copy (the complete series on DVD starts at more than $100 on Amazon with few alternative options). There's always eBay, though. I can't be the only one who used to rent the VHS tapes from Blockbuster or the library growing up. The appeal of the show to kids like me was getting to see a live-action adaptation of a classic fairy tale, while parents might find interest in the celebrity guests chewing up the scenery. 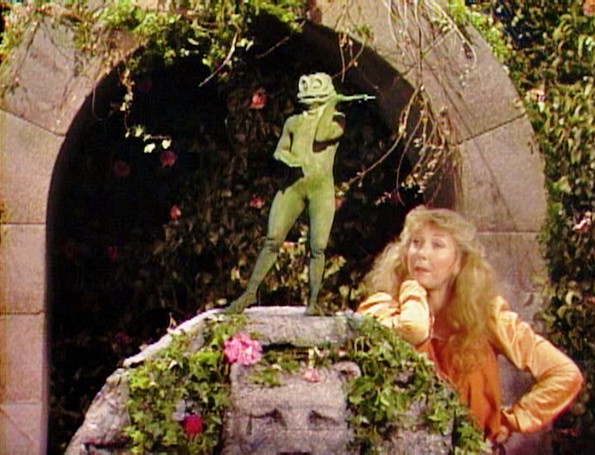 The pilot episode, "The Tale of the Frog Prince," features Robin Williams as the titular toad who returns to his original human state after kissing a princess played by Teri Garr. I really wish frogs were reptiles; otherwise, I'd make a reptilian shape-shifter joke. Unlike amphibians, the origins of Faerie Tale Theatre take place on land rather than water. Creator and executive producer Shelley Duvall developed the show after reading the Brothers Grimm's The Frog Prince and pitching a television adaptation to Williams, who was confident in exploring the humorous aspects of the story. Monty Python's Eric Idle was brought in to write, direct, and narrate the pilot.

It's easy to tell where the show is going from this first episode. The effects are cheesy and the sets look fake, but that's honestly part of the enjoyment. The novelty of watching these actors take on these roles—always either fully costumed or beneath tons of makeup, depending on the character—is the big draw-in for me. Where else are you going to find a miniature version of Williams in green tights and a frog mask?

When I think back on my favorite episodes, "The Three Little Pigs" comes to mind. Billy Crystal, Fred Willard, and Stephen Furst portray the trio, while Jeff Goldblum plays the big, bad wolf. Goldblum may have successfully warded off dinosaurs in the past, but these anthropomorphic swine can do more than just open doors. Other memorable performances throughout the series include James Earl Jones as the genie in "Aladdin and His Wonderful Lamp"; Leonard Nimoy as the Jafar role (although unnamed) in the same episode; and Carrie Fisher as Thumbelina in "Thumbelina." Darth Vader, Spock, Princess Leia—one of these things is not like the others.

The list literally goes on and on: Christopher Reeve as Prince Charming; Vincent Price as the Magic Mirror; Mary Steenburgen as Little Red Riding Hood; Paul Reubens (aka Pee-Wee Herman) as Pinocchio; Mick Jagger as an emperor. It's also fun to note the various guest directors brought in to helm each episode, including Francis Ford Coppola and Tim Burton. I'd love for the series to get revived someday, the same way Jordan Peele is handling the new Twilight Zone. He'd actually be perfect for it, but I'd rather he pursue his current course toward a Gargoyles reboot. Wow, another flood of nostalgia. Gotta save that one for the next Bingeable—stay tuned! (Six seasons, 27 episodes, lengths vary) Δ