Where? Streaming on Netflix.

Flaked is the epitome of an identity crisis: It doesn’t ever seem to truly understand what it is, and neither will its audience.

This new Netflix Original Series was created and produced by Will Arnett (Arrested Development, The Lego Movie), starring as Chip, an alcoholic who moved to Venice Beach in Southern California, to escape his troubled past that haunts him: The time he drove drunk and killed a man.

Chip is now a sort of self-help guru who actually needs more help than anyone he coaches. He’s an avid liar and manipulator who avoids his problems at all cost. And much like the people he surrounds himself with, Chip needs to face the music and move on with his life.

The premise, while on its face seems shallow, is painstakingly deep and convoluted, which is the main component of the show’s identity crisis. Chip’s actual day job is making three-legged stools and selling them at a shop in the heart of the city. When Chip meets a woman named London (Ruth Kearney), the attraction turns his whole world upside-down. His best friend, Dennis (David Sullivan), ends up dating London, and Chip goes on a manipulation spree. 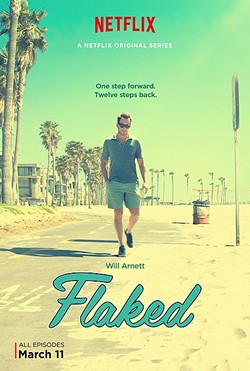 From there, the plot winds sort of out of control, twisting and turning with no real direction, and the payoff at the end of its eight episodes is questionably not worth the journey. The acting is sub-par for the most part, and the dialogue is stiff and unoriginal, but without a doubt, the show has moments that make it worth the watch.

There are some pretty sweet guest stars, including Christopher Mintz-Plasse (Superbad, Kick-ass) and Kirstie Alley (Cheers, Look Who’s Talking), who both do a phenomenal job, and while Arnett’s acting is well done, his co-stars, Sullivan and George Basil are pretty much the ones who hold this show together.

Is it a drama or a comedy? Is it a soap opera or a mystery? It’s a little bit of all of them wrapped into one mediocre experience; however, there are moments of laughter and heartbreak, and if it does get renewed for a second season, the possibility for something great is definitely there (eight 30-minute episodes).