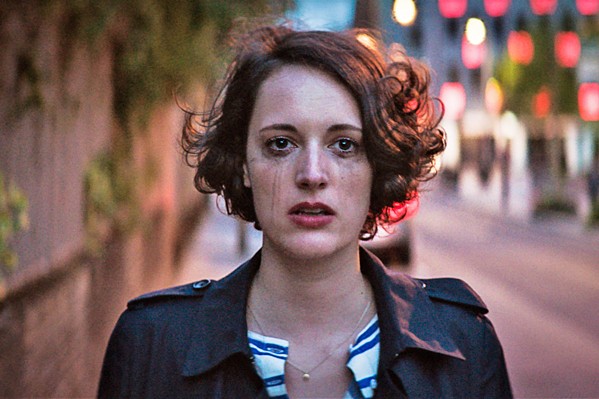 Fleabag is the funniest thing on TV right now—a bone-dry British comedy-drama about a selfish, angry, sexually voracious but nameless woman (Phoebe Waller-Bridge), who's floundering through life. She can't hold down a relationship, though she strings along her ex-boyfriend, Harry (Hugh Skinner), whenever she needs a booty call—that's when she's not shagging one of her other love interests like Arsehole Guy (Ben Aldridge), Bus Rodent (Jamie Demetriou), or the Catholic priest (Andrew Scott) she falls for in Season 2.

Created by Waller-Bridge from her one-woman play she debuted at the 2013 Edinburgh Festival Fringe, the program's hallmark is the way the lead character breaks the fourth wall, looking directly into the camera and speaking to the audience. Waller-Bridge's comic timing, facial expressions, and these fourth-wall asides are simply brilliant. They allow her to make a running commentary on her life's travails, of which there are many.

Much of the drama stems from the lead character's relationship with her much more successful but just as unhappy sister, Claire (Sian Clifford), and her exasperated father (Bill Paterson) and the sisters' godmother (Olivia Colman), who took up with their father upon their mother's death. Claire's loutish, alcoholic husband, Martin (Brett Gelman), also manages to generate a lot of drama. The family's dysfunction is spellbinding! The tension between the various characters is pushed below the surface in that most British of ways. Sarcasm has never sounded so polite.

The lead character, let's just call her Fleabag, runs a small and largely unsuccessful café that she started with her best friend, Boo (Jenny Rainsford), who's deceased but visits Fleabag in her head, conjured by some guilt Fleabag harbors, which is slowly revealed over the first two seasons. The show plays like a comedy but exposes itself as a tragedy, which helps explain Fleabag's abhorrent behavior—she's recovering from a deep psychological trauma.

This is hilarious, devastating TV, and it's certainly deserving of its 100 percent Rotten Tomatoes critic score. Laughs are followed by poignant moments, and Waller-Bridge is so charismatic and likable, bringing a deep humanity to her irreverent and broken character. This show bears repeated viewing. (12 episodes) Δ