Bingeable: Gilmore Girls: A Year in the Life

I say this as a die-hard fan of the show who looked up to Rory (Alexis Bledel), shared her journalistic ambitions, and was team Dean in the early days and team Logan later on. I felt that show creator/writer Amy Sherman-Palladino(who was fired before the show’s seventh and final TV season) ultimately squandered her chance to give characters and fans closure.

That being said, was it great to see the characters again? Yes. Was it still head and shoulders above most revivals, such as the literally wink filled Fuller House? Yes. Did I watch all four 90-minute episodes the day it hit Netflix? Obviously.

When the show left off, Rory was 22 and a recent grad about to go cover then Presidential candidate Barack Obama on the campaign trail. Fast-forward and Rory is now 32, freelancing but otherwise unemployed, and crashing on friends’ couches. Meanwhile, Lorelai (Lauren Graham) is still running the Dragonfly Inn and living with, yet somehow still not married to, our favorite diner owner Luke (Scott Patterson). The recent death of Gilmore patriarch Richard (the late Edward Herrman) hangs heavy on Emily (Kelly Bishop), Lorelai, and Rory. 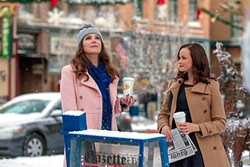 I could go off on a million tangents on this revival so I’ll start with what it got right. That fast talking BFF vibe between Rory and Lorelai is still very much there. Emily’s metamorphosis from society dame to grieving widow is so raw and beautifully done and we amazingly get to hear her yell “Bullshit!” several times at the stuffy ladies of the DAR club. Everyone’s favorite grumpy French inn concierge Michel (Yanic Truesdale) is finally openly gay and married (though we never get to see his husband). And we finally get a moment of understanding and acceptance between Emily and Lorelei, who have had a rocky relationship since Lorelai got pregnant at 16 and took off.

As far what it got wrong, well there’s a lot. You’ll notice that none of my favorite things included Rory. That’s because Rory is now a garbage human being, which is depressing considering what a caring, assertive female character she was in the early seasons of the show. But at 32, Rory is not only floundering career wise, she’s having an affair with an ex-boyfriend who just happens to be engaged to another woman. And while infidelity could make for an interesting storyline, we’ve already seen this before when college Rory slept with married ex-boyfriend Dean (Jared Padalecki). Then she was young and maybe didn’t know better. Now, at 32, there’s no excuse, especially considering that Rory seems to have zero inner conflict about it.

Other sins of the revival include a random 20-minute musical in the middle of the story that was terrible and didn’t serve the plot. While the super white Conneticut town of Stars Holllow now magically has more people of color than when the show ended in 2007, almost none of them have speaking parts or names. We only get Melissa McCarthy in one mediocre scene.

As fans know, Sherman-Palladino decided years ago how the story would end, down to the final four words. I won’t spoil that here, except to say that the words to me weren’t an ending so much as a cliffhanger. That all being said, the revival will be at least moderately enjoyed by Gilmore Girls fans, if only for the nostalgia factor.