Finding out your husband is gay after 40 years of marriage at a friendly dinner is the sideswipe of the century. Finding out he's been having an affair with his best friend for the past 20 years behind your back before drinks are even served … let’s face it, that is just a bitch slap to the face.

That bite of reality is the premise for the Netflix Original Series Grace and Frankie, created by executive producers Marta Kauffman, writer of Friends, and Howard J. Morris, producer of Home Improvement. The show follows the lives of Grace Hanson (Jane Fonda) and Frankie Bergstine (Lilly Tomlin) after finding out their husbands have been having a lengthy love affair with each other and want to get married. Grace is a retired cosmetic mogul who is always perfectly put together, usually with a vodka martini in hand, and a bit of a prude. Frankie is a hippie art teacher for recovering convicts who is constantly stoned, takes down drones with her T-shirt cannon gun, oh and she makes her own yam-based lube.

Although they’ve spent many a family vacation and barbecue together over the years, the show’s protagonists have never been too fond of one another. Now Grace and Frankie are forced to rely on and support one another through this strange new chapter of their lives, first by finding common ground in being royally pissed off at their ex-husbands. As you can imagine, the two drastically different ladies never really see eye to eye on most things. As Grace and Frankie are forced to live in a mutually owned beachfront home in San Diego that their ex-husbands bought together years prior, the dynamic of the friendship of these two loveable characters unfolds and grows. From dealing with their now ex-husbands—a longtime divorce lawyer team, Robert Hanson (Martin Sheen) and Sal Bergstien (Sam Waterson)—being a full-blown couple, their adult children with all of their own issues and reactions, and trying to figure out how to be single 70-year-old women in the 21st century, this series is not lacking in depth, hilarity, or humility. 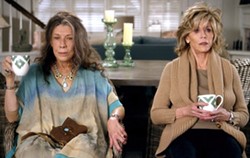 Not only does this show tackle many major modern social issues such as gay rights, elderly sexual activity, adoption, religion, and death, it manages to stay upbeat and uplifting while digging up some not-so-easy-to-talk-about issues. Fonda and Tomlin really bring the much-needed comedic relief necessary to deal with such hot-button topics. You just can’t wait to see what shenanigans Grace and Frankie get themselves into next. Lucky for us, Netflix announced in December 2015 that season three is on its way!

This comedy series knows how to pull at your heartstrings while making you cry-laugh at the same time. Believe me, it will not disappoint. (Two seasons of 10, 30-min episodes)