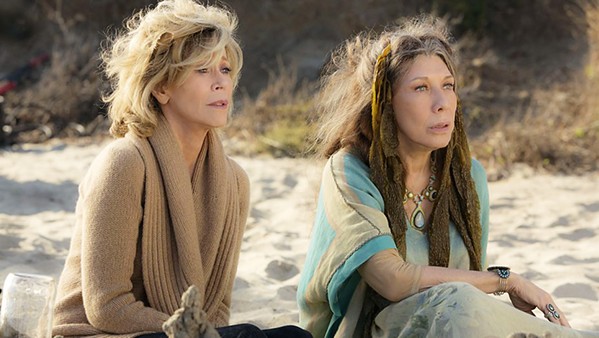 Jane Fonda and Lily Tomlin star as Grace and Frankie (respectively) in this Netflix series about two women forced to move in together after their husbands announce they have been in love with one another for 20 years and plan to get married. Martin Sheen plays Grace's ex-husband, Robert, while Sam Waterston plays Frankie's ex, Sol. Grace and Frankie have merely tolerated one another for decades because their husbands ran a law firm together. But after the divorce, the odd pair lean on each other through their weird shared experience, forming a bond that makes them besties.

Navigating life after years of a marriage you now believe was a big, fat lie is hard enough, but doing it at 70 years old is even tougher. Not only do Fonda and Tomlin have to build a new life, they have to basically start from scratch at an age when most folks are settling into their waning years. But at least they have each other—and lots of drugs and alcohol. And sex. And a whole lot of F-bombs. What more could you ask for?

This series has been my show for the last couple of weeks. Watching Fonda and Tomlin bounce off one another has been fun. They show their age, make fun of it, and embrace it. Grace, who retired from the successful cosmetics company she started, and Frankie, a hippie who teaches ex-convicts how to paint, are forced into a shared life. As they try to figure out love; lust; how to get around with back problems; and work through their sometimes difficult relationships with one another, their kids, and their ex husbands, they start a vibrator company for older women with arthritis. It's kind of amazing—and shocking—which makes this show all the better.

Fonda and Tomlin have great chemistry, and have since they first appeared on-screen together with Dolly Parton nearly four decades ago in 9 to 5. Then, they played three secretaries who worked for a sexist boss they got revenge against. It's a fun, feminist comedy. And the ladies do the same in Grace and Frankie: only it's not just female empowerment they're after. The show tackles ageism in a funny, irreverent way, and I for one, can't get enough. Season 6 is coming soon, and who knows, Parton might even make an appearance. (5 seasons, 30-min. episodes) Δ