Did you know that hamster mothers often eat their babies? That male bedbugs stab their mates with knife-like penises and then ejaculate into the bloodstream? Or that snails have both vaginas and penises? 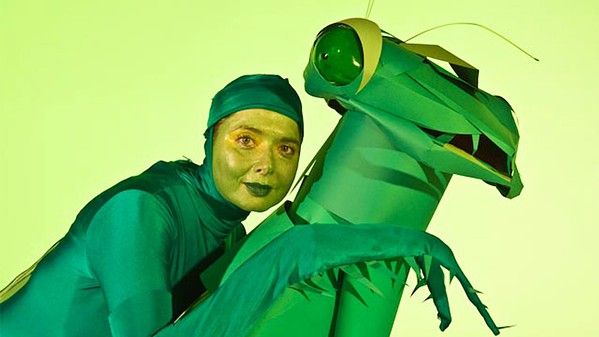 Rossellini goes on to not only describe how bees reproduce, but acts it out while dressed like different kinds of bees. It's an insane juxtaposition—an icon running around in a bumble bee jumpsuit, humping papier-maché bee figurines. While Rossellini illustrates how bees mate in flight, her paper bee penis falls off inside the female.

"But pulling out from her, my penis would break off!" Rossellini shouts, looking down at her wound through bug-eye goggles. "It would get stuck in her vagina like a cork in a bottle, but it would prevent other males from mating with her."

It's the best thing that has ever been filmed in all of history.

The rest of the three-season series is more of the same, and Rossellini dives into and acts out the strange, and often aggressive, mating habits of spiders, dragonflies, and whales (which can get 6-foot erections). In season three, she focuses on sea creatures that are being impacted by overfishing.

That's the thing about Green Porno—it's completely ridiculous but incredibly informative. Unlike most shows today, the episodes only run a few minutes each, making the show digestible and forcing Rossellini to break down the information into its most understandable terms.

Admittedly, it seems like a strange project for a rich and famous senior citizen to put time and energy into, but in a behind-the-scenes interview, Rossellini says she simply loves animals.

But while people aren't necessarily interested in biology and animals, Rossellini said they do love sex. ∆