Those lines, delivered so perfectly by Robbie Coltrane as Rubeus Hagrid in Harry Potter and the Sorcerer’s Stone, are what herald the true beginning of an eight-movie saga that follows the young Harry Potter (Daniel Radcliffe) through his education at the wizarding school Hogwarts, adventures with his friends Ron Weasley (Rupert Grint) and Hermione Granger (Emma Watson), and their life-or-death battle with the dark wizard Voldemort (Ralph Fiennes). The call to adventure plunges Harry lightning-bolt-scarred-headfirst into the world he never knew because he grew up with his abusive aunt, uncle, and cousin 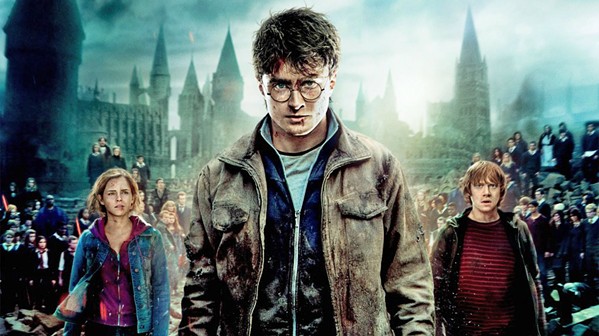 The Harry Potter series was an incredible cinema undertaking, especially considering it began the same year as Peter Jackson’s interpretation of the Lord of the Rings trilogy. They still hold up as marvels of special effects and storytelling, seven years after the last installment premiered.

The first two films were directed by Chris Columbus (The Goonies, Home Alone), who really captured the child-like feel of the first two books, where the wizarding world is new and unfamiliar to Harry. Sorcerer’s Stone and Harry Potter and the Chamber of Secrets established early that the Hogwarts castle is a character in and of itself, thanks to the incredible set design of Stuart Craig, who provided a continuity through all the films.

Columbus knew that he needed to get the casting right for these films. You’re always taking a gamble on child actors, especially when you know they’re going to grow up along the span of a franchise, but Radcliffe, Grint, and Watson were perfect choices. Radcliffe blossomed as an actor; Grint always had the strongest comedic sense of the three; and Watson’s talent launched her into the limelight despite sometimes being a bit of an overactor (there, I said it).

But Columbus also surrounded these kids with the best of the best of British actors, from Coltrane as Hagrid to Richard Harris as Albus Dumbledore, headmaster. The rest of the teachers at Hogwarts are important as well, from the pitch-perfect Maggie Smith as the shrewd Minerva McGonagall to the beloved performance by the late Alan Rickman as Severus Snape.

As , Harry matures and the directors change. Harry Potter and the Prisoner of Azkaban saw Alfonso Cuarón (Y Tu Mamá También) bring an artfulness to the series, where Harry connects with two of his deceased parents’ closest friends, Remus Lupin (David Thewlis) and Harry’s godfather Sirius Black, a role that Gary Oldman just about disappears into.

Director Mike Newell (Four Weddings and a Funeral) took on Harry Potter and the Goblet of Fire, bringing a comedic element that explored the awkwardness of early teenage years. We see Harry ask a girl his first dance and Ron and Hermione complicate their romance. That film ends on a heavy note, with the death of Hogwarts student Cedric Diggory (Robert Pattinson) and the return of Voldemort, where makes his dastardly debut in the series.

The franchise’s last four installments were realized by Director David Yates, who’s now directing the prequels to the series. His first crack at it was Harry Potter and the Order of the Phoenix, which opened up Harry’s world to the complexity of politics and authoritarianism as a wizarding war began. The decision to split the last book the franchise, Harry Potter and the Deathly Hallows, into two parts was frustrating when the movies first came out (we waited so long!), but makes sense given the scope and complexity of Rowling’s saga as it came to an end.

For those who never bothered to read the series, the films are a great introduction to an immersive world that hooked so many literature and cinema fans in the early 2000s. And whether you’re a Slytherin or a Gryffindor, a return to the films will have you dusting off your wand and shouting “EXPECTO PATRONUM!”