Bingeable: Haters Back Off

The opening scene in the first episode of Haters Back Off is so shockingly funny, it'll seduce you into at least watching the rest of the episode, and probably binging the whole eight-episode series.

The show opens with a grainy video of a smug-looking girl—her bright red lipstick is over-applied, her eyebrows are ridiculously tweezed. With a backdrop of an open bedroom closet filled with clothes spilling out, she introduces herself to the camera as Miranda Sings (Colleen Ballinger) and starts belting "Defying Gravity" from the popular musical Wicked. 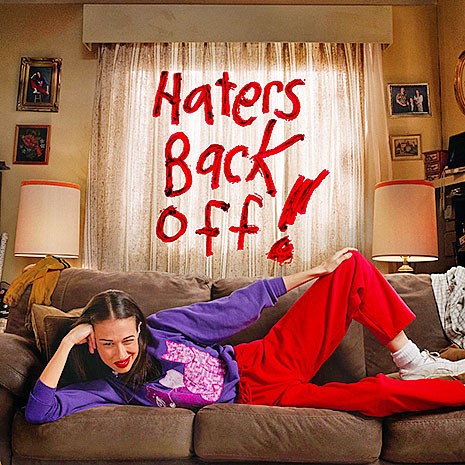 Oh, the humanity! Her voice is awful. Her style is obnoxious. Her sense of self-awareness is nowhere to be found. It's so bad, so ridiculous, and yet so funny, that by the end of the song you're both laughing hysterically and uncomfortably cringing—and curious about what she'll do next.

That's the Miranda Sings experience. Miranda is a brainchild of Ballinger, who's an actually talented vocalist, actress, and comedian. Ballinger created the character Miranda in 2009, when she started performing one-woman shows as her around the country and publishing videos to YouTube (the very platform that Miranda is seeking fame on). Haters Back Off is a full-fledged Netflix series based on the character, and it follows Sings and her hopeless family in Tacoma, Wash.

Just after that epically terrible first song, Miranda's very creepy uncle, Jim (Steve Little), puts down the camera in excitement and unveils his five-phase plan to make Miranda famous on YouTube. Through the episodes, we watch Miranda confront her "haters" on the internet and in real life; see her resigned mom, Bethany (Angela Kinsey), fail to stand up to Miranda and her distortedly glistening opinion of herself; and cringe at her vocal performances in the church choir group.

Haters Back Off has a hint of Napolean Dynamite to it—that absurd and exaggerated type of satire that walks the fine line between comic genius and too-stupid-to-be-able-to-enjoy. Haters too often tilts to the latter, but it captures enough moments of Miranda gold that make the binge worth the time (although, I recommend watching with a friend, a friend with whom you share a similar sense of humor). Though the show is set in modern day, everyone is somehow dressed like it's the 1980s, again harkening back to that Napolean Dynamite vibe.

What rings most true—and what's most valuable—about Haters Back Off is the overarching commentary on society's current obsession with internet popularity. Its premise hinges on the false notion, instilled in many youth today, that the number of views, comments, clicks, or likes on a given online post is the true reflection of its value or your worth. Miranda Sings is the embodiment of that misguided and egocentric belief gone very, very awry. (Eight, 30-minute episodes.)