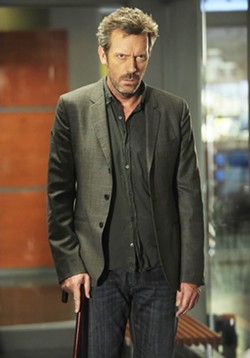 Hugh Laurie (A Bit of Fry & Laurie, Sense and Sensibility) stars as the titular character Gregory House in the medical mystery drama/comedy House, which follows the talented yet drug-addicted doctor through mysteries that he solves with the help of a team of expert doctors by the end of each episode.

As the gifted yet tortured genius, House employs controversial methods that put him at odds with his hospital's dean of medicine, Lisa Cuddy, played by Lisa Edelstein (Girlfriends' Guide to Divorce, The Good Wife), though they harbor romantic feelings toward each other. An acerbic and anti-social cynic, House has only one true friend, the hospital's oncologist, James Wilson, played by a fantastic Robert Sean Leonard (Swing Kids, Dead Poets Society). The show is actually based on Sherlock Holmes (House, Holmes; Wilson, Watson; get it?), where House uses deductive reasoning to solve cases, bouncing ideas off his team and best friend.

In the initial seasons of the show, House's team consists of doctors Allison Cameron, played by Jennifer Morrison (How I Met Your Mother), an immunologist who balances her encyclopedic knowledge with an empathetic approach to patients; Eric Foreman, played by Omar Epps (ER), a no-nonsense neurologist; and Robert Chase, played by Jesse Spencer (Neighbours, Chicago Fire), an Australian-born doctor with daddy issues and the best surgeon in the hospital.

House's rapport with his team is, well, interesting. He plays pranks on Chase, makes racist remarks to Foreman, and toys with Cameron's emotions. It's all designed to get under their skin, pit them against each other, and always have them fighting for his approval and seeking a cure for their patient.

The way House approaches patients is strange as well. He hardly ever wants to meet them at first, and wants to reduce them to just symptoms and medical histories. It's only when his approach gets out of hand that House comes in to save the day, winning them over despite his insults and ego.

House is also a show about addiction. The character is disabled from a leg injury—walking with the cane and limp—and relies on the pain as an excuse for his Vicodin addiction. He pops pills in front of patients, his doctors, everybody, which leads to issues with the law and even his own sanity. Wilson is the constant conscience for House, picking apart his motivations and excuses, trying to get him help and encouraging him to work on his anti-social and megalomaniacal tendencies.

The show was highly rated and managed to stay interesting across its eight seasons despite the sometimes-formulaic feel of its episodes. Even in the pilot episode, the characters are fully formed and complex, but we get to see them develop, go through serious stuff, everything from breaching ethics, to addiction, to suicide. The group's collected talent is a study in ensemble acting, truly.

And for all its drama, the show is also funny. House's pranks and comments will get you laughing even on a repeat viewing. The show's creator David Shore (Battle Creek, The Good Doctor) knew what he was doing when he cast Laurie as the lead, leaning on the British actor's multiple talents, from his perfect American accent to his musicianship, to help portray the polymathic practitioner.

I also commend any show that has the class to end itself appropriately, which House definitely does, leaving fans with bittersweet joy and closure at its final episode. Δ