For those like myself who discovered the series way too late, it came as a surprise that the incredibly potent biopic miniseries John Adams—starring Paul Giamatti, about early America, presidential power, and the personal cost of politics—came out all the way back in 2008, before the 2016 election season. Much like the presidents of that time, George W. Bush and Barack Obama, the historical John Adams has come to mean many things to many people, and HBO's miniseries based on the historically inspired novel by David McCullough seeks to explore this complex character. 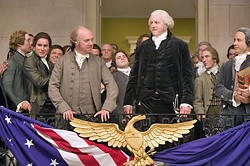 Giamatti truly carries this seven-part cinematic series as the idealistic, bombastic, temperamental, and nevertheless important framer of American democracy. But behind every great man, there is a strong woman, the condescending platitude goes, and so to not mention Laura Linney's performance as Abigail Adams would be an impeachable high crime indeed. Rightly considered a "founding mother," Abigail's remonstrances of her husband's blunders make up some of the shows best, most intimate scenes. Giamatti and Linney together both lionize and humanize these larger-than-life figures, and even flip off the wigs and petticoats to get hot and heavy at one point (don't worry, the scene is far from explicit).

The show opens up with a pivotal moment that helped spur the Revolutionary War—the Boston Massacre. The scene is darkly ominous, with Adams arriving to bloody men lying on cobblestone. I'm not sure the real Adams was there, but what he did do was defend the British soldiers in court, helping them dodge a murder charge. While he wasn't popular at the moment for it, and his cousin Samuel Adams (Danny Huston) was already seeding revolutionary sentiments after the verdict, Adams was seen as defender of law and reason of the highest order. The first episode ends with him getting nominated to serve on the Continental Congress.

The episodes that deal with the early Congress and the authoring of the Declaration of Independence will suck you in, as Adams meets Benjamin Franklin, astoundingly realized by John Dossett; Thomas Jefferson, played by a calm yet piercing Stephen Dillane; and of course George Washington, whose portrayal by David Morse is a sight to behold. Seriously, it's like your billfold came to life and started arguing about the rights of man.

Much of the action of the Revolutionary War happening in the middle act is not seen in John Adams, and why would it? Adams was overseas in Europe for much of that time as a diplomat, so the show focuses on his struggles with diplomacy and being away from his family, and Abigail's trials at home with the kids, hearing cannon fire across the Boston bay.

Later, during Adams' presidency, divisive partisanship rears its ugly head, cleverly illustrated by Adams, a federalist, and Jefferson, a rebellious Republican, whose friendship withers away over differing opinions. There are also great moments of Adams' famously fiery rage at his cabinet, largely inherited from Washington, including a wonderfully harsh berating of Alexander Hamilton (Rufus Sewell) that ends with a perfect, "Good day sir!" from Giamatti. While the show may try to paint Adams in a softer light than he might deserve, it's also bold in exploring his weaknesses, like the trials he put his family through, including his estranged son Charles Adams.

Whether you think presidential politics is too crazy these days, or you're hopelessly addicted to the drama of the news cycle, John Adams is a fun look back at what it means to be commander in chief in a time when people were doing it for the first time. It's also a beautiful cinematic experience with a compelling musical score, so if you can't make time for this show, well, sir or madam, I say to you, good day! Δ