La Casa de Las Flores, or as Netflix has it titled on its streaming service The House of Flowers, is a modern-style telenovela whose characters and storyline are extremely exaggerated, overdone, and ridiculous. I love it.

The series is also entirely in Spanish with some English here and there, so if you speak Spanish, great! If you don't, you'll probably have to turn on the subtitles. 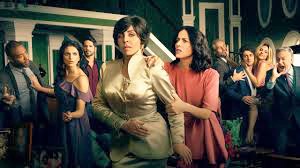 The second season was recently released, so in preparation for watching the newest episodes, I'm taking a look at the family whose lives were unraveled by a woman's suicide.

While this family may seem picture perfect, there are plenty of skeletons that come dancing out of the closet after a mysterious woman hanged herself in the Casa de Las Flores. Her body was discovered during Ernesto's lavish birthday festivities, a time when the entire family is reunited.

Turns out, the mysterious woman is Ernesto's mistress, Roberta (Claudette Maillé) and business partner. Did I mention their secret joint venture is also called Casa de Las Flores, but it has nothing to do with plants. It's a cabaret that specializes in putting on glamorous drag-queen performances. The cat is out of the bag, and of course Virginia is having a nervous breakdown about it.

As the story unfolds, with Roberta as narrator, there are plenty of hilarious jaw-dropping twists within the family's tale: blackmail, a sex tape, cheating, and marijuana dealing among other things.

Casa de Las Flores takes me back to all the telenovelas on Univison, an American Spanish-language television network, I would watch with my parents in the evenings after dinner. In retrospect, I think they believed I wasn't paying attention to what was on the screen, but I was hooked.

The stories were outrageous and the characters were so convincing, always on the verge of falling in love, getting backstabbed, tumbling down a flight of stairs, or finding out their aunt is really their mother.

While this series doesn't break too many boundaries of the age-old telenovela story-telling format, I'm not mad about it at all. I will say that integrating the LGBTQ community in a telenovela is something that is very new, and it's done in a fun and respectful way.

Let's also tip our hats to Verónica Castro who's been in this industry her entire life.

If you love a good mystery and plenty of hilariously delivered scandalous events happening to one family, I suggest you catch up on season one. (two seasons, roughly 30 min. episodes) ∆