The true crime genre is currently experiencing a renaissance in movies and television. From documentaries like Netflix's Making a Murderer and HBO's The Jinx, to fictional television shows like The People v. O.J. Simpson, there's a stunning amount of excellent media out there for true crime fans, ushering in what may just be a golden age for stories about the darker side of human nature. 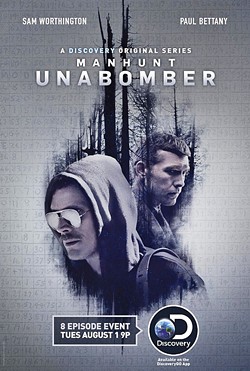 With the renewed interest in true crime proving popular (and lucrative) for networks and streaming services, it was only a matter of time before someone took on one of the most iconic criminals in American History: Ted Kaczynski, better know as the Unabomber.

Operating from a tiny, remote cabin in the woods of Montana, Kaczynski constructed and mailed intricate and deadly bombs to professors and scientists across the country between 1978 and 1995. Driven by an anti-technology ideology, Kaczynski killed three people and injured 23 others. Before the FBI arrested him, his reign of terror spread throughout the country, even forcing major newspapers like The New York Times to print his 35,000-word manifesto to prevent further bombings.

Discovery Channel's Manhunt: Unabomber is an eight-episode television drama that documents the FBI's hunt for the Unabomber, told primarily thought the eyes of profiler Jim "Fitz" Fitzgerald (Sam Worthington). The show documents Fitzgerald's use of "forensic linguistics," using language, phrases, and terms in the Unabomber's letters and manifesto to identify and eventually arrest Kaczynski (played by Paul Bettany). The film's hour-long episodes jump between before Kaczynski's arrest, as Fitzgerald fights through the FBI's bureaucracy and the dismissal of his work, to after, when he is called back in to convince the mad bomber to plead guilty to the charges against him instead of going to trial.

The mini-series' strongest virtue is the way it shows that actually catching a criminal mastermind is far different than what is portrayed on procedural schlock like CSI. What brings down the Unabomber isn't cops kicking down doors and shaking down suspects or even using high-tech gadgets to get forensic evidence. Instead, it was a wonky linguist like Fitzgerald, who diligently spent years reading the Unabomber's writings and nailing down the personality of the criminal. Famously, the break in the Unabomber case was a not a "smoking gun" fingerprint or DNA match. Instead it occurred when Kaczynski's brother noticed an odd turn of phrase "have their cake and eat it, too" in the manifesto, a phrase he'd read in past letters from his brother.

The show does a good job of portraying the day-to-day footwork of a massive, high profile investigation without getting too bogged down or boring, and it breaks up the drama surrounding the investigators with snippets of the angry, socially awkward Kaczynski, which Bettany nails to a tee.

The show still has some flaws. At times, it seems to lean on a lot of common tropes of crime dramas. Fitzgerald for example, is "haunted" by his work on the case, and finds himself sympathizing with Kaczynski's views, so much so that his obsessive work on the case ruins his marriage. The show frequently shows Fitzgerald being ignored and even mocked by his FBI superiors, and they never give him much credit for his role in brining the Unabomber's case to a close. However accurate they are to what really happened, both the "tortured cop" and "genius detective ignored by his superiors" tropes are well worn, and it feels like they are played up to increase the drama and suspense.

In total, Manhunt: Unabomber presents an excellent example of how to do a fictional version of a real-life case the right way: using the inherent drama, tension, and pathos of the actual events to create an engrossing, fascinating, narrative that makes you feel like an insider in a world that most of us, thankfully, will never have to experience in real life (eight, 60-min episodes). Δ