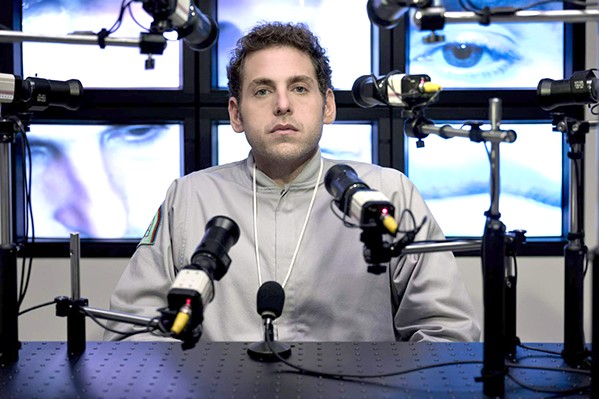 A psychedelic emotional roller coaster is the only way to describe Netflix's latest original series, Maniac. It follows Annie Landsberg (Emma Stone) and Owen Milgrim (Jonah Hill), two strangers who are drawn to a pharmaceutical drug in its trial stages for their own personal gain.

Netflix originals are notorious for diving into futuristic and utopian worlds where technology takes over or the world's self-destruction forces humans to explore the outer atmosphere for a new home. Either way, Maniac falls into the futuristic category but explores the depths of the human brain—how humans control their emotions and alternative ways to aid those experiencing mental illnesses.

We meet Owen and Annie at turbulent times in their lives. Owen is recovering from a mental breakdown. Every day, Annie relives a traumatic accident that involved her younger sister.

Following his breakdown, Owen, diagnosed with schizophrenia, starts seeing a vision—a person who looks like his brother's alter ego—that tells him that he's destined to save the world.

As a result of the accident, Annie becomes an addict of a pharmaceutical drug that isn't easy to get a hold of because it still hasn't passed a trial run.

Owen's vision guides him to Neberdine Pharmaceutical Biotech, a Japanese company that introduced an experimental drug enabling an individual to delve into their mind and confront whatever is bothering them. Dr. James Mantleray (Justin Theroux) and Dr. Azumi Fujita (Sonoya Mizuno), the creators of the drug, believe that with the drug people who have a mental illness or are suffering from trauma can address the root of their illness without the need of a therapist—make people who are unhappy happy again.

Annie finds herself at the company's headquarters as she seeks more pills to feed her addiction.

The two are unknowingly destined to help each other as they work through their personal demons.

A majority of the scenes take place in Owen and Annie's combined dreams under the influence of the drug. Each time they're under, they find themselves in different roles: a gang member, a mythical creature, an FBI agent, or a nurse. Each role they play is only an extension of a characteristic that they have or a nagging feeling that's hindering their happiness.

What makes this 10-episode series so interesting is how chaotic and outlandish it is, jumping from one dream sequence to another. The chemistry between Hill and Stone is completely lacking throughout the series, but it makes complete sense. The characters aren't supposed to be attracted to one another because they understand each other and want to help each other out; they're meant to be friends.

Really, my biggest takeaway is that the human mind is a dangerous and complex maze unique to every individual, too complicated to navigate alone. Sometimes you just need a friend to talk things through with. (10 episodes, 40 min.) Δ