If you are familiar with my writing you might already know that I am a ride or die fan of the cozy mystery. There are many I love, but none can hold a candle to my favorite series of all time, Murder She Wrote. 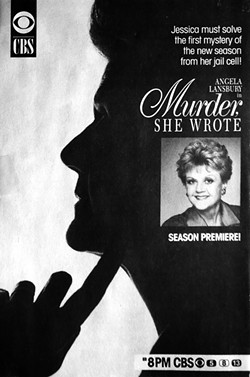 Once scoffed at as a throwaway show for the elderly CBS Sunday evening crowd, the show (and its indelible star Angela Lansbury) have experienced a bit of a resurgence in recent years, thanks in part to a loyal cult following led mostly by women who find a kindred spirit in writer and widow Jessica "J.B." Fletcher. There are fan sites dedicated to the show, several fan podcasts, and more than a few fashion blogs celebrating the specific style of America's most beloved crime solver. It spawned a host of copycat shows in the 1980s and influenced modern day mystery series such as Monk and CSI.

Murder She Wrote hits all the notes of a perfect cozy mystery. Almost every episode is entirely self-contained. Lansbury delivers the kind of soothing maternal comfort one expects from a cozy mystery, always reminding the audience that despite the horrifying bloodshed they just witnessed, everything is back to its idyllic norms. Cozy fans don't want to deal with consequences—they don't want to watch trials that take unfair twists, they don't want to deal with the painful processes of grief, or be reminded that lives have been utterly ruined by what they've just witnessed. They want to solve easily puzzled mysteries delivered in comfortable doses without any of the gritty aftereffects.

For 12 seasons, Lansbury delivered on that promise. Her J.B. Fletcher was unflinching in her devotion to the suspension of disbelief. Always smartly dressed in a skirt and suit jacket (adorned with a classic brooch, naturally) or snuggled in her sweats as she power walks or rides her bike around Cabot Cove, Lansbury never once let it slip that she was aware of her own premise. She, like all great cozy mystery stars, sails through each murder with a blinding innocence to her own history and provocative skillset. Lansbury brings a graceful British sensibility to the macabre happenings around her, and it's her ladylike handling of the brutality of human existence that makes her so compelling to watch.

One of the other great things about Murder She Wrote is the long parade of guest stars who are now major celebrities in their own right (or were in their Hollywood heyday). Some memorable names include Bryan Cranston, Neil Patrick Harris, Jessica Walter, Megan Mullally, LeVar Burton, and Oscar-nominated actor Joaquin Phoenix.

But really, it's the mysteries that make it a great show. Murder She Wrote delivers on the same promise every week: A whodunit filled with quirky devious characters, each one more likely than the next to bludgeon their loved one to death over a simple disagreement. Fletcher is skilled at displays of proper etiquette while secretly poking around for a truth she knows exists beyond that safe veneer. It's what makes the show so watchable. Figuring out who did it and why is fun, beyond the campiness of the '80s fashions and technology peppered throughout every episode.

If you're still coming with preconceptions that the show is out of date and made for a crowd that's aged beyond its expiration date, you're missing the point. Murder She Wrote is a tightly written mystery series that doles out complex crimes with intricate motivations. Even if you just happen to enjoy watching a bunch of shady, uppity people up to no good get dragged by a kind, little old lady, this is the show for you. (12 seasons, 60 min. episodes) Δ