Bingeable: Nathan For You 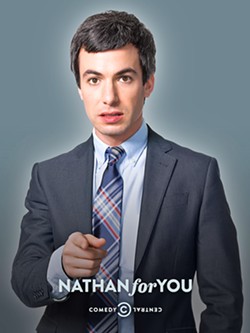 Halfway through the first episode of Nathan For You, my girlfriend stood up and walked away, pissed off at what we were watching. The show is clearly not for everybody, and there were times I felt guilty about how much enjoyment I found in a show that could easily be perceived as manipulative and mean-spirited. But among the hilarity and the guilt, the show captured genuine heartfelt moments about the nature of human companionship that you rarely see on TV, let alone on Comedy Central.

In Nathan For You, comedian Nathan Fielder plays a fictionalized version of himself, who travels to small businesses in Southern California and offers truly terrible and borderline illegal advice on how to boost their profits. Armed with a degree from one of the top business schools in Canada—which Nathan likes to remind viewers of in a voiceover at the beginning of each episode—he designs ridiculous schemes and somehow convinces business owners to follow along.

The series' first episode starts off with a relatively tame idea. Nathan convinces the owner of a frozen yogurt shop to sell a poop-flavored yogurt as a public relations stunt, which is gross and weird, but not the most controversial idea. In the same episode, Nathan visits a pizza shop with an idea for a promotion where customers receive one free pizza if their order isn't delivered within eight minutes. The only catch: The free pizza is small, like 1 inch small.

When the poor kid delivering the pizzas shows customers their bite-size prize, they aren't amused. One customer basically threatens to physically harm the kid delivering the pizza—it was at this time that my girlfriend stormed away. It's one thing for the pizza shop owner to look foolish agreeing to this plan, but another thing to subject this kid, who probably is making minimum wage, to deal with its effects.

It's these sorts of moments that made me uncomfortable watching the show, especially because it's unclear how much the people involved know about what's going on. Nathan approaches owners under the guise of a professional business consultant and not the host of a show, although they must know something's awry when Nathan starts laying out his absurd ideas.

While his marketing proposals are ridiculous and silly, that's not what generates the show's humor. The best parts of the show focus on Nathan's intense social awkwardness while trying to find human companionship and his complete lack of self-awareness when he fails. One of the many long-running arcs in the show is Nathan asking if business owners want to hang out sometime and the inevitable rejection he receives almost every time.

But there are instances where he does find the connection he's constantly seeking, and it can be incredibly moving. One scheme involving a rebate for cheap gas ends with Nathan hiking to the top of a mountain where he camps out for a night with three total strangers.

Jarringly, the episode ends with the gas station owner awkwardly talking to Nathan about the benefits of drinking urine, as if reminding the viewers, this is Comedy Central after all. (Four seasons, 30 min. episodes) Δ