It's taken me a while to get around to Outlander, a period romance-drama about Claire Randall (Caitriona Balfe), an English combat nurse we meet in 1945 just as World War II has ended. She's finally able to reunite with her husband, Frank (Tobias Menzies), who was off fighting the war, and to rekindle their romance, they travel to Scotland, where Claire is transported back in time to 1743 Scotland. There she finds herself caught in the skirmish between Scottish clansmen and occupying British soldiers. How is this possible? Magic Stonehenge-like stones! Go with it! It's a fantasy series! 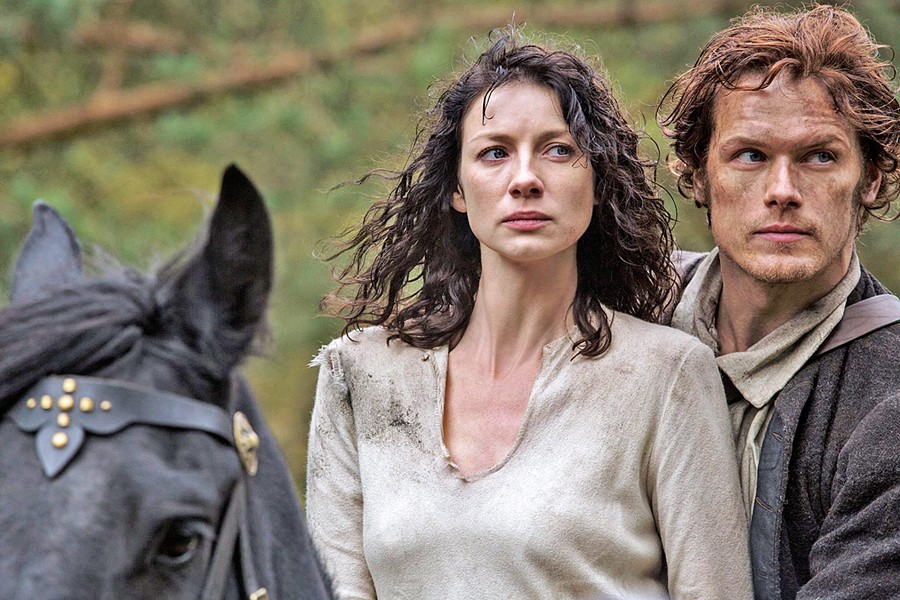 Claire meets wounded clansman Jamie Fraser (Sam Heughan), and since she's a combat nurse with 20th century medical knowledge, she patches him up and gets caught up in the fomenting Jacobite rebellion, which she knows is doomed to fail because, you know, history and stuff! To the people of the 18th century, she's akin to a witch. Between her magical healing skills and her uncanny precognition, she's got advantages, and she'll need them now that she's living in a violent patriarchal society.

To add some spice to the already steamy melodrama, she also meets her husband Frank's ancestor, Captain Jonathan "Black Jack" Randall (also played by Menzies), a sadist who seems to have a hard-on for Claire's new love Jamie, who we learn has an ugly past with Black Jack.

It's one of those rare series that both my wife and I enjoy. Between rooting for the noble underdogs of clans facing off against the Redcoats and rooting for the strong leading lady as she stands up to the domineering men of the era, we're both interested, plus there's some rousing action sequences and steamy sex scenes—hubba-hubba.

We're partway into the second season, and Claire and Jamie have escaped Scotland and Black Jack's pursuit to travel to France, where they're in proximity to the court of King Louis XV (Lionel Lingelser), a real ponce with a mean streak, as well as Prince Charles Edward Stuart (Andrew Gower), who the Jacobites consider the rightful heir to the English throne even though he's a simpering putz. The series recently wrapped up its fourth season, so we have plenty more to watch.

We haven't gotten to it yet, but apparently Claire manages to travel back and forth through time, so she's eventually reunited with Frank, and then back again with Jamie. The series also changes settings, eventually moving to a British colony in North Carolina, where Claire witnesses slavery firsthand. She is not pleased!

Apparently Season 5 is coming in about a month. I doubt we'll catch up by then, but we're trying! (53 to 90 min. episodes) Δ