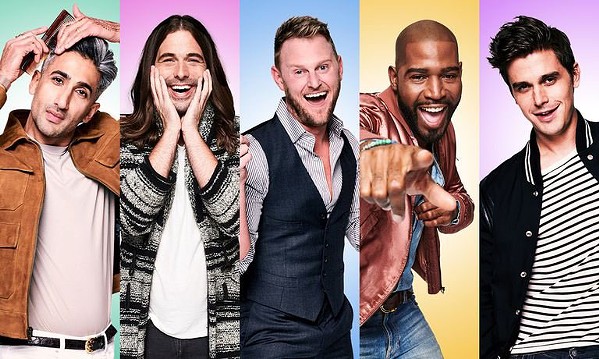 Five men are sharply dressed, dancing gleefully together in black and white. Netflix will give you an option to "Skip Intro," but the charming moves render that button inapplicable while watching Queer Eye—let the men dance! The show, a 2018 reboot of the early 2000s show, Queer Eye for the Straight Guy (2003-2007), follows a new "Fab Five" around Georgia as they complete well-executed makeovers. Faces, wardrobes, homes, and palates are all upgraded, but hearts tend to undergo the most changes.

The Fab Five could very easily be the dictionary definition of a dream team. It's composed of five gay men who each have a specific area of expertise: Antoni is food and wine, Tan is fashion, Karamo is culture, Bobby is design, and Jonathan is grooming. Each episode features a new person—all are lovingly dubbed "heroes"—for the Fab Five to makeover within their specialties. The team's help extends beyond the superficial to actual lifestyle changes, giving the show its slogan of "more than a makeover."

While the original show only made over straight men, the new Fab Five helps people regardless of their gender or sexuality (though straight men are still the primary canvases that the team works with). This shift works out splendidly because the Fab Five isn't for just one group of people—they're for all of us. During a time of increasing polarization across the board, Queer Eye brings people of different beliefs and lifestyles together, both on and in front of the screen.

When was the last time you heard healthy discussions regarding transgender identity, racial profiling, and homosexuality within religion? Probably not last Thanksgiving when your grandfather and cool aunt got into a fight and ruined dessert. Queer Eye tackles these issues and more head-on; differing viewpoints are worked out and consensus is reached. The whole show is civility wrapped up in sparkles and sporting a French tuck (Tan's iconic shirt style).

While the makeovers and discussions are lovely, the guys are what make the show so binge-worthy. Antoni is the heartthrob; he's a mix of suave bartender and cute boy next door. His smile is giggle-inducing—but, be warned, every time Antoni cries you are bound to cry twice as hard. Karamo, whose expertise is culture, is really just the resident therapist and confidant. After one episode you'll be ready to face his unbreakable eye contact and reveal your deepest fears. Tan's fashion advice is virtually scripture; Bobby can make any space HGTV-approved; and Jonathan's flowing locks and playful remarks steal almost every scene.

Most episodes end with the Fab Five gathered around the couch in their loft, turning on the TV to watch a clip of how their "hero" is getting along. These scenes switch off between the clip and the Fab Five's reactions to it—the guys laugh, cry, gasp, and squeal. These scenes are especially thrilling; your reactions sync up with theirs, and you may as well be on the couch next to them.

With only two seasons and fast-paced episodes hovering around 45-minutes each, this series is an easy binge and a delightful ride. If you're looking for a fun show, but also don't mind blowing through a few tissue boxes, Queer Eye should definitely be first on your list. (16, 45-minute episodes per season) Δ