Historical dramas have to be a lot of things at once. They have to be grounded in historical fact, but not bogged down by too many details.  They have to have a sweeping sense of historical scope, but still have to appeal to the personal lives and dramas of everyday people to keep viewers engaged.

It’s a lot to ask from a film or television show, which is why in my opinion historical dramas truly worth watching are few and far between. The 2016 mini-series Rebellion is one of those few. The show is set against the backdrop of Ireland’s 1916 Easter Rising, when a small army of insurrectionists took to the streets of Dublin, openly fighting British troops and seizing several buildings and declaring Ireland a republic independent from English rule. The rebellion only lasted a few days, and even though it failed, the rising became a symbol of and rallying cry for future bids for Irish independence, and it was yet another chapter in the country’s violent and bloody division over independence in the future. 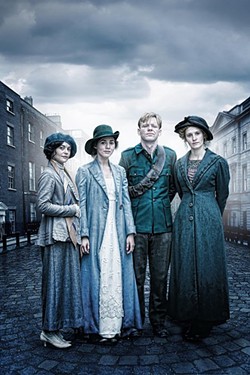 The plot of the show mainly follows three women, each from different strata of Irish society, who find themselves embroiled in the plotting and execution of the same rebellion. Elizabeth Butler (Charlie Murphy) is a medical student from a wealthy family who flees her arranged marriage to a British Army officer to join the rebels. May Lacy (Sarah Greene) is a working-class civil servant navigating a pregnancy resulting from her relationship with her boss, a married Englishman. Francis O’Flaherty (Ruth Bradley) is a militant believer in the cause of Irish independence who will do anything necessary, including violence, to achieve that goal.

The fact the show’s main characters are women is rather unique in itself. Most stories of the rebellion tend to focus on the men, who in 1916 Irish society had far more power, influence, and opportunity. In this way, the show frames the Easter Rising not just as a military battle against English rule, but as a flashpoint for the women rebelling against the roles society had forced them into and the expectations of the men around them. While the show has male leads, the three women characters form a personal nexus for the complex class, religious, and other societal issues that sparked the rebellion and the subsequent strife that only ended very recently in the country. It eschews an overly dense narrative and instead chooses to show viewers the very intimate struggles and agonies of the people caught in the sweep of historic events. The only bad thing I can say about the show is that it is only five episodes long. Hopefully, the rumors of a second season are a reality, and we can continue the story of Rebellion in the near future.