What makes a great detective? How does the stress of the job manifest itself? What coping mechanisms keep an investigator from slipping into depression? These are the sorts of questions River is interested in.

The six-episode BBC One series focuses on John River (Stellan Skarsgård), a brilliant but troubled Swedish police detective working in London. Early in the first episode, we discover his partner Jackie “Stevie” Stevenson (Nicola Walker) was brutally murdered. Though she’s gone, she and others appear to him as something he calls “manifests,” the imagined ghosts of his partner, a teenage murder victim whose body he’s tasked with finding, and a suspect in his partner’s murder he chased who fell to his death. 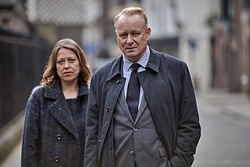 More than simply a police procedural, this is a series about loss and grief. The real mystery is John River’s mind.

Not only is River expected to undergo a psychiatric evaluation—he frequently appears to be talking to invisible people, after all—but now he’s under investigation for the death of the pursued suspect, whom he’s since concluded was innocent. Despite being taken off the case, he and his new partner Ira King (Adeel Akhtar) continue to investigate Stevie’s death, and the further he looks, the more he discovers she had a secret life he knew nothing about and was perhaps involved in an off-the-books investigation of illegal immigration.

One of the most interesting “manifests” River conjures is a character named Thomas Cream (Eddie Marsan), who appears to be 19th century serial killer Thomas Neill Cream, also known as the Lambeth Poisoner, who seems determined to poison River’s mind. Think of him as River’s guilty conscience.

All this makes for a fascinating story filmed in a bleak film noir-ish way, and it’s held together by a remarkably expressive performance by Skarsgård. The 6-foot-3 actor is an imposing presence—a hardened detective whose afflictions make him highly sympathetic.

Likewise, Walker’s Stevie is a nuanced characterization, especially as River learns more about her and realizes he didn’t know her that well after all. Since her responses and reactions are generated from River’s imagination, Walker isn’t so much portraying Stevie as she is portraying River’s projection of Stevie. It’s thorny stuff to get your head around.

River and his “manifests” work together to make sense of their victimhood. At one point, the teenage murder victim’s mother asks him, “How do you let a person go if you don’t know why they’ve gone?” That seems to sum up River’s drive to discover the truth, and it may be why he’s such a remarkable detective. Until he can solve their cases, he’ll continue to be haunted by their presence (60 min. per episode).