Creators Leslye Headland, Natasha Lyonne, and Amy Poehler have come together to direct Lyonne (Orange is the New Black) as Nadia, a woman stuck reliving the eve of her birthday, and sometimes the next day if she plays her cards right. 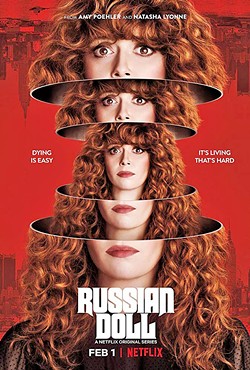 I'll try not to give too much away here, but Russian Doll follows Nadia through the night of her birthday celebration. One of her best friends, Maxine (Greta Lee), has thrown her a party in an artsy flat in New York City, of course, that's overflowing with people.

The scene opens up with Nadia standing in front of a bathroom mirror bracing herself with the reality of turning another year older and having to mingle with people at the party. She hears a knock at the door, turns the water faucet off, grabs the doorknob (which is a pistol), opens the door as two women walk into the bathroom, and then she walks into the kitchen where Maxine greets her by saying, "Happy Birthday, baby."

She meets some random guy who's a real pompous know-it-all and goes home with him. Nadia needs cigarettes, so they head to the local liquor store, and she sees her missing cat, Oatmeal, across the street.

Without checking for traffic—did your mother teach you nothing?—she runs right into the crosswalk where she's hit by a taxi. Dead on impact, Nadia is lying in the street with blood trickling out of her mouth.

And then, as if it were all a dream, Nadia finds herself in front of the bathroom mirror of Maxine's flat once again. A confused Nadia tries to do the night all over again, but her death is different. Needless to say, she dies a couple more times until she realizes she's in a constant loop.

Of course, the show centers on Nadia trying to figure out what wrongs she needs to right in order to avoid constantly dying. It's a good thing she soon learns she's not alone when she happens to meet Alan (Charlie Barnett)—and that's all I can say without giving away too much.

If you're old enough—I'm not saying you're ancient—you might put 2 and 2 together and remember one of Natasha's first roles in the entertainment business, as Opal on Pee-wee's Playhouse. Or maybe you'll remember the large-eyed, curly haired actress as Nicky Nichols from Orange is the New Black. Her latest role in Russian Doll is far different from these other performances, but she still keeps her cheeky wit throughout her scenes.

The storyline idea isn't a new one; we've seen it in Groundhog Day and recently in Happy Death Day. But what makes this show worth binging is the characters are memorable, the puzzle pieces effortlessly go together as the story progresses, and, even if you think you know what's going to happen, there are plenty of twists. Δ