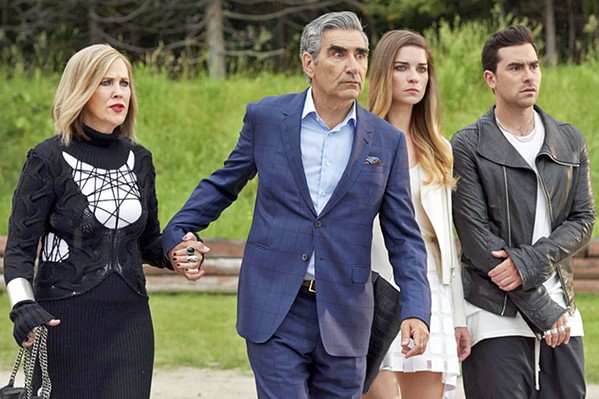 Think of Schitt's Creek as an inverted Beverly Hillbillies. Instead of poor people striking it rich and loading up the truck to move to Beverly Hills, the rich Rose family loses it all and is forced to retreat to their sole remaining asset, a tiny town called Schitt's Creek, which they'd bought years ago as a joke birthday gift for their son.

Patriarch Johnny Rose (Eugene Levy) was a video store magnate defrauded by his business manager. His vapid socialite wife, Moira (Catherine O'Hara), was a former soap opera actress who revels in her past. Their pampered adult children—vacant Alexis (Annie Murphy) and pansexual David (Dan Levy, Eugene's real-life son)—have never had to work a day in their lives.

Dan Levy conceived of the premise while watching reality TV, wondering, for instance, what the Kardashians would be like if they suddenly found themselves poor. He enlisted his father, Eugene, who came up with the show's title, and together they're the co-creators and executive producers. Overall, the tone is relentlessly droll, and while I'm loving this show thanks to its brisk 22-minute episodes and clever banter, it definitely doesn't connect with all viewers and reviewers, many of whom have panned it.

I find the interplay between the various characters engaging, and the dynamics among this once wealthy family explore the importance of togetherness and support. Moira and Johnny are a team, but Moira's pretentiousness often overwhelms Johnny. Alexis and David are frequently at odds, in part because Alexis is completely obtuse. They're fun to laugh at—rich people getting their just deserts! But you also come to like them because, deep down, they're decent human beings.

Eugene Levy is a comedy pro, having appeared in classics such as Best in Show, American Pie, and A Mighty Wind. His son, Dan, has definitely inherited his father's comedic timing ... and eyebrows! The father and son are pretty fun together. The real standout of the show, however, is O'Hara, who's costarred with Levy in a number of films. Their chemistry together is amazing, and her subtle facial expressions are remarkable. She's a terrific actor.

Chris Elliott as the bumbling mayor is also good for a lot of laughs. Roland means well, but can't seem to do much right. Yes, this is broad comedy, but it's genuinely funny!

It's not, however, especially deep, but if you're looking for some lighthearted fun, quality acting, zippy storylines, and a character named Roland Schitt (Get it? Roll in shit?), check out Schitt's Creek. (four seasons, 22 min. episodes.) Δ