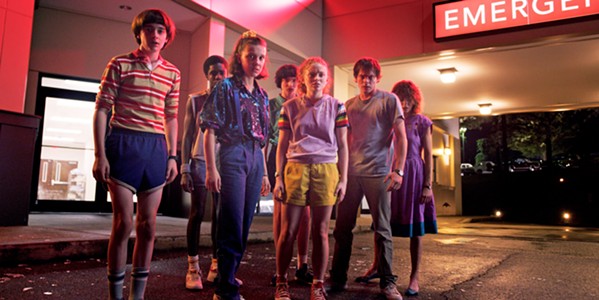 The Upside Down is back, and America's most cursed fictional town, Hawkins, Indiana, is in for another wonderfully frightening whirlwind of drama and destruction, in the third installment of Netflix's Stranger Things, which came out July 4.

Co-creators Matt and Ross Duffer made a huge splash with the show's first season in 2016 by combining '80s culture, kid heroes, and sci-fi drama to create a highly relatable small town with big, supernatural problems. The crux of the show is basically that a nearby secret government lab has caused a fissure in reality, opening up a dangerous parallel universe containing violent monsters that want to enter our world and destroy us.

Season three is set in the summer of 1985, mere months after the dramatic events of second season (which I won't spoil). The first thing you'll notice here is that our endearing youth leads are getting older. Adolescent-aged Eleven (Millie Bobby Brown) and Mike (Finn Wolfhard) are now an inseparable couple, as are Lucas (Caleb McLaughlin) and Maxine (Sadie Sink), and the slightly older Nancy (Natalia Dyer) and Jonathan (Charlie Heaton).

Love is in the air—and the kids are enjoying the arrival of a new mega-mall in town, which, side story, is destroying Hawkins' local economy—but we know all isn't right. Our troubled protagonist, Will (Noah Schnapp), starts sensing a dark presence that's familiar and unmistakable. His inklings are backed by inexplicable power outages and strange happenings with rabid rats. Nancy, an aspiring reporter who's working as an intern at the horribly sexist Hawkins Post, begins investigating. Then, lovable nerd Dustin (Gaten Matarazzo) picks up a cryptic Russian communication over a radio transmitter that he built at science camp, which sends him, Steve (Joe Keery), Robin (newcomer and scene-stealing Maya Hawke), and Lucas' precocious sister, 10-year-old Erica (Priah Ferguson), on a mission to crack the code.

In essence, the Russians are trying to secretly re-penetrate the closed gate to the Upside Down, with a plasma-looking weapon. The gate isn't totally open yet, but the two worlds are starting to intermingle once again. I don't want to spoil much more about the plot than this. Episode by episode, the mystery unfolds in a really spectacular way.

I was critical of Stranger Things' season two for having a slower pace and too many story lines. This new season also has a slow build and seemingly dozens of story arcs—for even more characters! But it's much better executed this time around. Everything weaves together into a cohesive whole, and the story progresses like a riveting spy novel, with special effects. The Duffer Brothers smartly lean heavily this season on the charisma of their characters, who are growing up before our eyes. The supporting cast delivers great performances, too, from Maxine's brother, Billy (a fantastic Dacre Montgomery), who becomes the human face of the villainous Upside Down, to eccentric investigator Murray Bauman (Brett Gelman), the only man in town to fluently speak Russian. This is an incredibly fun, heartfelt ride you don't want to miss this summer. (Eight episodes, 45 min.) Δ