More than a year ago, I appeared in this very column singing the praises of a brand new and unique Netflix original series, Stranger Things. The nostalgia-filled, '80s-based sci-fi drama starring five adolescents in Hawkins, Indiana, who battle an evil parallel universe concocted in a federal lab, took the world by storm, received rabid acclaim, and became a cultural phenomenon. 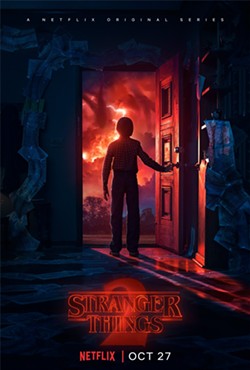 So needless to say, I waited with bated breath for the second season of Stranger Things to drop on Oct. 27. Sadly, I must report that the sequel is not nearly as charming and spectacular as its predecessor. But it's still fun, and definitely worth a binge-watch.

You've got the original cast back for season two—plus a few new faces. Will (Noah Schnapp), Mike (Finn Wolfhard), Dustin (Gaten Matarazzo), and Lucas (Caleb McLaughlin) are the one-year-older, slightly more mature quartet of ninth-graders (who are much more willing to throw out swear words). The boys are trying to move on from the ordeal that took place in season one, where Will was pulled into the "upside down" (a very scary and dangerous parallel dimension) and was kept hostage by a "demogorgon" monster. The kids eventually destroyed the demogorgon and saved Will, thanks in no small part to Eleven (Millie Bobby Brown), a government lab escapee possessed with telekinetic powers.

But the characters face some major obstacles to getting on with their regular teen lives. Will starts having episodes where he's dreaming he's back in the upside down and being confronted by a giant tentacled beast. But are they just dreams? Dustin finds a strange, unidentifiable tadpole-looking creature in a dumpster that he adopts as his new beloved pet. But is it dangerous? Eleven is living miserably in hiding with Hawkins County Sherriff Jim Hopper (David Harbour) and she's starting to go stir crazy. A real romance is brewing between her and Mike, even though the two haven't seen each other since the events of the previous season. There are also new characters, like Maxine (Sadie Sink), a new kid in town with an angry and abusive brother (Dacre Montegomery). The boys immediately take to her, but her role in the bigger picture is far from clear in the beginning.

Those plot points weave their way into an intricate and dramatic story. However, the main difference between the two seasons is in the pace and style of storytelling. The Duffer Brothers, the creators of the show, take much more of a slow-build tack in season two, attempting to thread many plot layers over the nine episodes. For me, those layers were too disparate and at times felt contrived. It didn't have the incredibly organic and believable feel of the first season. Some moments are cringingly corny, whereas the dramatic moments in the first season were, in a brilliant way, satirically and comedically over the top—like with Will's frenzied mother, Joyce (Winona Ryder)—which I thought was brilliant.

Hey, sophomore seasons are hard to pull off. Stranger Things is still a gem of a show with some of the most engaging characters—especially the kids—on television right now (nine, 43-minute episodes). Δ