Government conspiracies, parallel universes, bloodthirsty monsters, and a badass girl with psychokinetic powers—does television get any better than this?

I don’t think so, which is why I couldn’t stop watching Netflix’s Stranger Things from the moment a bald girl in a hospital gown named “11” (Millie Bobby Brown)—an escapee from a reckless and immoral government experiment—steals a plate of french fries from a diner, and then destroys two federal agents with her mind. We should all thank the internet lords for streaming services because the eight episodes of Stranger Things are a perfect package for binge viewing. 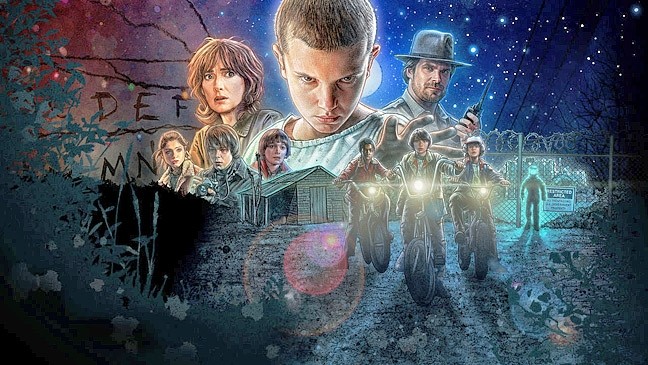 Set in Indiana in 1983, the pilot episode heats up when 12-year-old Will (Noah Schnapp) mysteriously goes missing while biking home after a game of Dungeons and Dragons with his friends. Setting off a panic in the otherwise sleepy town of Hawkins, Will’s mother, Joyce (Winona Ryder); his hermit teenage brother, Jonathan (Charlie Heaton); and Hawkins police chief Jim Hopper (David Harbour) embark on an investigation that quickly becomes anything but routine.

We know from the outset that some seriously corrupt funny business is going on at the neighboring U.S. Department of Energy top-secret lab. In an effort to find Will, a trio of nerdy friends, Mike (Finn Wolfhard), Dustin (Gaten Matarazzo), and Lucas (Caleb McLaughlin), start to unravel a disturbing conspiracy involving an evil scientist, a faceless monster, and a deadly parallel universe described by 11 as the “Upside Down.”

There are some great performances and dialogue in this show. Ryder is hilarious as Will’s frenzied, distraught mother; Brown is terrific as 11; and I loved the banter between Will’s friends. Their commitment to solving the mystery and confronting evil brought me back to my Animorphs binge-reading days.

Stranger Things is an obvious tribute to 1980s film and culture, playing like a quirky brainchild of Steven Spielberg and Stephen King. Of course, the Duffer Brothers are the real creators of this show. They draw on familiar themes and storytelling tactics, but their story and characters are unique in their own right—bringing to life a fully hatched, well-conceived world that’s impossible to resist.

The show is excellent because of its dimensionality: It’s funny, scary, suspenseful, melancholy, scientific, and thoughtful. It appeals to adolescents and adults. It has great heroes and detestable villains. Characters die. As a viewer, you really don’t know what to expect. And the finale gives you a cliffhanger that just begs for a season 2.

Stranger Things has become a phenomenon on Netflix, already surpassing the site’s acclaimed Making a Murderer in viewership. If you haven’t jumped on the bandwagon yet, do yourself a favor and end your summer with a nostalgic, edge-of-your-seat trip to the Upside Down. (Eight, 60 min. episodes.)