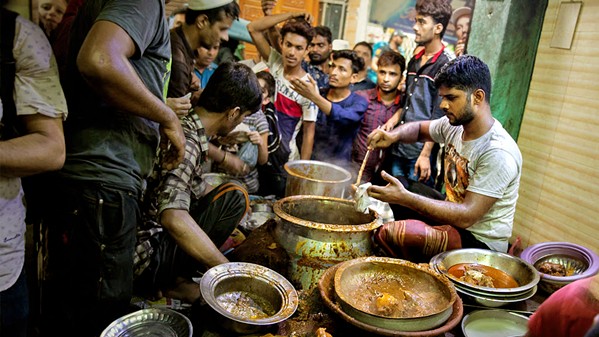 My husband and I have devoured every episode of Netflix's Chef's Table and Ugly Delicious, glasses of wine in hand. Sometimes, though, a 45- to 60-minute episode would be too much of a full meal for a weekday evening. So when the streaming service/studio launched Street Food, its newest food documentary series by the creators of Chef's Table, we figured its 30-minute episodes would hit the spot. We came away mostly satisfied.

The setup, premise, and execution initially feel familiar: The filmmakers take the audience to the locale, pinpoint it on a map, show lots of sweeping cinematography, introduce the chefs—in this case the hardworking street vendors of nine different Asian cities—share their stories, and add a dash of perspective from food journalists.

But instead of dwelling on the main chef for the entire 30 minutes and giving a deep sense who they are and everything that goes into their dishes, the episodes typically interweave two to three other street vendors with the central chef's story. This breadth, even in the short time span, adds a taste of each city's culture and history.

The series does manage to do a beautiful job of creating intimacy quickly. The profiled vendors have little visible ego and often shed tears or look inward as they share the tragedies they've overcome to keep their family's food stalls viable. These are stories of triumph and tradition, one day at a time.

In Seoul, South Korea, food stall owner Cho Yonsoon opened her now popular shop to sell hand-cut noodles in order to bring her and her husband out of deep debt. She radiated strength and humility as she talked about the ridicule and stiff competition she endured from the other vendors before becoming successful.

In the Singapore episode, Aisha Hashim shared about returning home from America, where she'd gone to culinary school and had begun her own career. Her family's putu piring stall was failing, so she stepped in, bringing innovation to keep alive the traditional rice flour and palm sugar dessert.

While many of the profiled vendors work alongside multiple generations to keep their family's recipes and country's traditions alive, a man known as Uncle Goat in Chiayi, Taiwan, shared that he wants a better life for his family. He's among a very few who can make the goat stew that dates back to the Sui Dynasty in China, but burying the individual pots in a smokey furnace is extremely hazardous.

Street Food is like a dense, richly flavored, and tightly wrapped lumpia (watch episode nine about Cebu, Philippines, if you don't know what that is). Overall, the series presents a well-executed buffet of heavy appetizers, which whet my appetite for even more. (nine episodes, roughly 30 min. each) Δ