What do you get when you combine the Cold War, undercover espionage, and marital strife? The Americans, a gripping spy thriller series on FX that follows Elizabeth (Keri Russell) and Philip (Matthew Rhys) Jennings, a married couple in Washington, D.C., serving as undercover spies for the Soviet Union under the guise of their cookie-cutter American domestic life. Created by a former CIA agent, Joe Weisberg, the series skillfully threads together a complex and layered story that parallels the agents of two world powers on U.S. soil during an escalation in the Cold War. 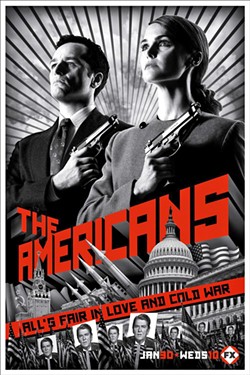 The year is 1981, and we meet Elizabeth and Philip in the middle of a risky mission for the motherland—to kidnap a high-level Soviet defector from the grasp of the FBI. The kidnapping goes somewhat sideways, and they're forced to hold the man in the trunk of their car until scrutiny dies down. Meanwhile, the Jennings are bewildered to find out that they have a new neighbor, FBI agent Stan Beeman (Noah Emmerich). Beeman smells something fishy about the couple, but he can't substantiate his hunch. Right away, the foundation for dramatic tension of The Americans is set between these three characters.

Each episode reveals more and more about the Jennings' backstory—when they were deployed to the U.S. from Russia, how they were forced into a marriage of duty, and how they're raising their two kids as normal Americans completely in the dark about their true identities. The plot is loosely structured around the events of actual history, starting with the assassination attempt of President Ronald Reagan and its fallout. The Jennings' espionage missions are reactive to these events, as are the efforts of the FBI, portrayed most intimately through Beeman. It all makes for adrenaline-pumping drama. Weisberg does an admirable job of exciting without rushing or overdramatizing, which helps the show's bingeability and believability.

Underneath all the hit jobs, bugging, deception, and politics, The Americans is a brutally honest tale of marriage and family. It's an odd, dark notion to have the Jennings, ruthless killers and Soviet nationals, as protagonists. Nonetheless the show aims to humanize the lives of the spies, as well as the U.S. agents trying to stop them. It seems like the goal is to illustrate what it might be like to be these people, to be wrapped up in a job and role that requires you to throw away so much of your humanity. Nobody in this show is completely moral (or even close to it), but all are relatively believable human beings.

The Americans runs six seasons and its finale aired earlier this year. All have received critical acclaim. I'm only finishing up Season 1, and aside from a couple duds with so-so storylines, most episodes are well-conceived and feature strong performances from the three leads and the myriad guest characters. (six seasons, 45-min. episodes) Δ