It’s a bold, risky move to make a historical show about a monarch who’s still alive, but that gamble paid off nicely for the Netflix Original Series The Crown, which follows the life of Queen Elizabeth II (Claire Foy) of England starting in the 1940s. In real life, her majesty just celebrated her 90th birthday.

I confess: I’m one of those Americans who is endlessly fascinated with the British monarchy. I was sad and confused by Princess Diana’s tragic death in 1997, and I stayed up until the early hours of the morning to watch Prince William marry Kate Middleton in 2011.

While I could tell you all about King Henry VIII and the various wives he beheaded, I didn’t know that much about Queen Elizabeth II, who has stayed out of the limelight as much as a queen can. The Crown really delivers in telling you more about her as an actual person as well as keeping that fairy tale magic of the royal family alive. The show also does a great job in keeping with the fashion of the day. 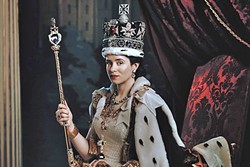 At the opening of the show we learn that Elizabeth is only to become queen because years ago her uncle, King Edward VIII (Alex Jennings) abdicated the throne in 1936 to marry an American who had been divorced twice. (Divorce was ironically still taboo in the Church of England at this time.) Elizabeth is painted as a quiet yet cunning woman determined to do her duty, but also keen on living a life she wants. Ignoring the protests of others, she married Phillip (Matt Smith) the love of her life, despite the fact that he was an exiled member of the Greek and Danish royal families, with a few Nazi relatives. While today Elizabeth and Phillip seem to have a lovely, mellow marriage, The Crown depicts their early years of marriage as tumultuous, with Phillip searching for meaning and purpose beyond being on the arm of the queen. The two also struggle with the very gendered roles of husband and wife at that time and the conflicting notion of Elizabeth being queen above everyone, even her husband. This issue comes out in a petty way, with Phillip not wanting to kneel before his wife at her coronation.

I was most surprised by the casting of American actor John Lithgow as Prime Minister Winston Churchill, but he pulled it off down to the accent and the slow belabored movements of a man past his prime. We see the forever changing relationship of Elizabeth and Churchill through their weekly meetings. While this is a show about Elizabeth, we do catch an intriguing glimpse into Churchill’s life at a point where his own party was trying to force him out of power.

Perhaps most shocking of all is that growing up, Elizabeth received a subpar education, which consisted mainly of learning the constitution and how to be a lady. As she grows older, she realizes how much she doesn’t know and empowers herself by hiring a tutor so she can keep up with the political leaders in England who rule in her name. This mistake obviously wasn’t repeated with future generations of royals, as Prince William graduated from the University of St. Andrews.

The show runners of The Crown intend for the series to span six seasons with each season covering a decade of the royal family’s life. Season two is expected to focus more on the backstory of Phillip and his relationship with his son Charles. Look for it on Netflix toward the end of 2017. (10, 50-minute episodes.)