Picture this: An ultra conservative group dominates the rights of women and ultimately downgrades females to second class citizens, that is if they aren’t part of the elite social caste of the community—sound familiar?

Margaret Atwood’s dystopian novel The Handmaid’s Tale has come to life as a haunting Hulu original show. The series hits the harsh realities of stripping women of their independent rights in a future America where they’re only praised for their healthy ovaries.

Sterility caused by pollution and sexually transmitted diseases has stricken the country, alarmingly plummeting the birth rate, and in comes a new regime called the Republic of Gilead. With the pretext of restoring order women are quickly stripped of their rights: employment, financial accounts, and autonomy of their own bodies. Their main purpose now, if proven fertile, is to provide the men in power with a child—as most if not all the men’s wives are barren—as handmaids in a desperate attempt to repopulate the world.

The 10-part series is told from the first-person perspective of Offred (Elisabeth Moss), a once free woman turned handmaid under the new regime. The scene opens up with Offred in a car with her infant daughter and husband, Luke (O-T Fagbenie), frantically trying to trying to flee the military by heading to Canada, where there is presumably still freedom and equality.

One wrong turn of the steering wheel and the car is stuck in a slump of dirt and trees—Offred must run 2 miles on foot with her daughter, unwillingly leaving behind Luke. As she trudges on, two gunshots are heard in the background and minutes later the military seizes her daughter by hitting Offred over the head and taking the baby away. 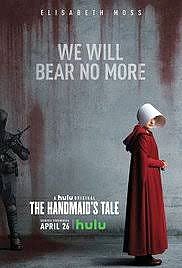 Throughout the episodes we’re given glimpses into Offred’s old life before the regime. She had a career, a best friend Moira (Samira Wiley), and the relationship she started with Luke. The city of Boston is shown in these scenes and it chillingly looks too current; in fact these are the years leading up to 2015 when Offred is taken by the military to be a handmaid, to be part of the breeding stock.

The images of her current life are shown in harsh dark colors, rooms are hardly illuminated, adding to the feeling of hopelessness that Offred finds herself engulfed in. The infertile women are ”Marthas“ (maids), gays and lesbians are ”gender traitors“ and receive the death penalty, and the very few fertile women are handmaids who are forced against their will to have sex and birth children.

What’s painted across the screen isn’t just the struggle between men and women, but the hatred created between all the women in this world. Mrs. Waterford wants nothing to do with Offred and bitterly interacts with her only for the sake of bearing a child, always asserting her dominance. Offred is turned against her fellow handmaids at first, because they’re all made to believe that they’re spying on each other. But Offred begins to learn there are others who loathe this world as well. An unlikely friendship commences with her fellow handmaid Ofglen (Alexis Bledel) who tells Offred of an underground resistance called Mayday.

With half of the episodes released and a new one to come every Wednesday, it remains to be seen if Offred can keep it together to learn about the resistance, bear a child before Mrs. Waterford drives her to insanity, and hold on to the glimmer of hope that she’ll find her daughter, and most importantly fight for freedom. (Six, 60-minute episodes released so far.)