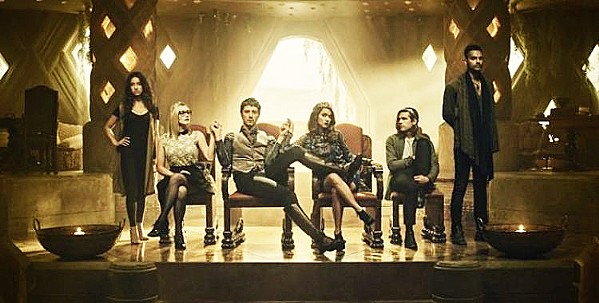 With three seasons out (but just the first two streaming on Netflix), the show follows a group of young adults as they discover their magical powers and are admitted to Brakebills (think Hogwarts, but for grad-school aged peeps) to learn their craft. We start with protagonist/loner Quentin Coldwater (Jason Ralph, A Most Violent Year) who is obsessed with the Fillory books (a blatant rip-off of Narnia) and never quite let go of the idea of magic like his BFF/lifelong crush Julia (Stella Maeve, Starlet) has. When the two are tested for magical abilities, only Quentin is accepted into Brakebills, leaving Julia out in the cold, determined to find her way to another source of magic.

At Brakebills we meet sassy upperclassmen Elliot (Hale Appleman, Private Romeo) and Margo (Summer Bishil, Towelhead) who show Quentin the ropes. Then there's the surly duo of Penny (Arjun Gupta, Nurse Jackie) and Kady (Jade Tailor, Murder in the First) who each have a complicated past. And of course we can't forget Alice (Olivia Taylor Dudley, born and raised in SLO! Seen in 2015's Paranormal Activity: The Ghost Dimension) the bookish girl who comes from a family of powerful magicians who quickly catches Quentin's eye.

This group of magical misfits is brought together because—surprise, surprise—Fillory is a real place that one can travel to through magical portals (hmmm, like a wardrobe perhaps?) and it's being run by a tyrannical magician, who's draining all the magic from Fillory, threatening life as we know it in both worlds. Oh and all the magicians have met before, but don't remember it because they're in a time loop, repeating history until they get it right, naturally.

I give The Magicians a fair amount of shade, but it's a fun time, especially for fantasy loving nerds like myself. The key is you have to accept it for what it is. The dialogue can be lacking, they definitely steal material from other fantasy sources, and there is a lot of sex (but mostly before- and after-sex stuff, not full-on in the throes of climax HBO sex stuff). But for someone who's sadly aged out of Hogwarts, it's fun to go along for the ride to Brakebills, and The Magicians also gets some points for tackling dark subjects like young children being sexually molested, rape, mental health, and child abandonment, something that other magical stories often gloss over or ignore completely.

While three seasons of The Magicians have been released since 2015, only two are streaming on Netflix. (But season three is available online on SyFy). Season four is expected to premiere in 2019, with season three becoming available on Netflix around the same time. (13, 43 to 52 min. episodes per season) Δ