"This is the worst day of my life," Los Angeles County District Attorney Gil Garcetti (Bruce Greenwood) says gravely, as he watches, from his office TV, fugitive O.J. Simpson's Ford Bronco barrel down Highway 405, with the entire LAPD following and the entire world watching.

Greenwood's well-delivered declaration makes a fitting summation of not just that historic car chase and police PR disaster, but of what's to come in the 2016 true crime series, The People v. O.J. Simpson. The 10-episode series, which first aired on FX and later won nine Emmy Awards, chronicles the former football star's notorious double-murder trial, from the Brentwood crime scene to the stunning "not guilty" verdict. 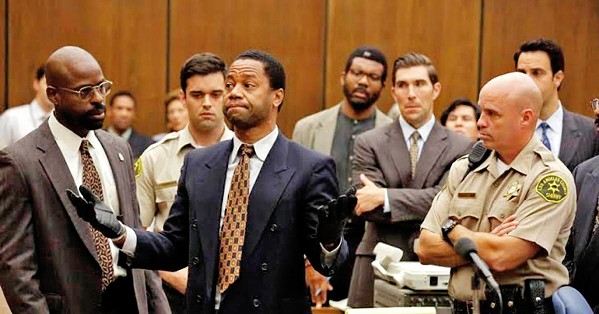 Competent, nuanced performances from the series' cast and good writing makes The People v. O.J. feel like a tale we haven't seen or heard before. It does a great job of establishing the historical context, beginning with the 1992 Rodney King riots that set the tone for the racial strife present in Simpson's prosecution, defense, and media coverage. Particularly impressive in their roles are Sarah Paulson as Deputy District Attorney Marcia Clark, who passionately and determinedly prosecuted the case, and Courtney B. Vance as Johnnie Cochran, the civil rights lawyer who joined Simpson's "Dream Team" of attorneys that ultimately prevailed. Both actors expertly draw out their characters' motivations and convincingly portray them in the context of the time.

Overall, this show does an effective job at re-creating what the Simpson case was in real life: one of the most dramatic and high-profile criminal cases in U.S. history. This trial distilled so many fraught elements of American culture and society, intertwining them in ways that couldn't help but generate nationwide intrigue. It exposed the blurred lines between justice, power, and celebrity. It brought racism and sexism to the fore. It represented enough salient stuff to trigger countless articles, books, documentaries, and TV series about it, like this one.

The People v. O.J. is a captivating ride. I learned quite a bit about the saga that I didn't know before (I was only 3 years old when the events took place). It's not a perfect show by any means. I wasn't a big fan of Cuba Gooding Jr.'s shrieky portrayal of Simpson, which according to other show reviews, wasn't really what Simpson acted and sounded like. John Travolta's stiff performance as Dream Team lawyer Robert Shapiro left something to be desired. At points along the way, there's a generic Law and Order vibe that I wish it avoided. But all in all, the pieces here fit quite well together (like a glove, you could say ... sorry), and the story, like it did in reality, unfolds in a thrilling way. Almost everything that's lacking is made up for with smart writing, direction, and a variety of strong performances. (10 episodes, 40 to 60 min. each). Δ