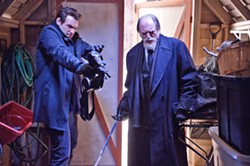 I'm obviously coming a little late to the party for this Guillermo del Toro- and Chuck Hogan-created vampire TV series since its fourth and final season has just started, but if you're a horror fan and haven't yet discovered this minor gem, you might want to fire up your Hulu and start binge watching. The first season, especially, is a lot of fun, though like a lot of series—The Walking Dead, anyone?—it begins to feel repetitive as it drags on.

Designed more as a forensic procedural, the series focuses on Centers for Disease Control and Prevention (CDC) field doctor Ephraim "Eph" Goodweather (Corey Stoll), who's called to an airport when a large passenger plane is found on the runway but appears to be "dead," as in no power and no signs of life from within. Long story short, Eph and his team enter and discover all the passengers are dead ... except for four.

Eph wants to quarantine the survivors, but politics are at work as well as a shadowy organization called The Stoneheart Group run by Eldritch Palmer (Jonathan Hyde), which may have something to do with the plane and a particular piece of cargo—a large, intricately carved box filled with soil. Del Toro's idea seems to be to take the old vampire story but reimagine it as really happening today in New York City. How would we respond? To be honest, del Toro doesn't quite pull it off—it still seems ridiculous—but it's told in an entertaining way.

Eph and his team are contacted by Professor Abraham Setrakian (David Bradley), a Holocaust survivor turned pawnbroker who has seen and fought this ancient evil before. He tells Eph that the four survivors as well as the couple of hundred dead passengers must have their heads separated from the bodies, which sounds ridiculous to Eph. He's a man of science, after all! But it doesn't take long for the survivors to develop a taste for human blood, as well as a long, barbed, tongue-like appendage that shoots out of their mouths and into the necks of their victims.

There are flashbacks to Nazi Germany featuring a young Abraham (Jim Watson) as well as Nazi commander Thomas Eichhorst (Richard Sammel), who oversaw the extermination of Jews at the Treblinka camp in occupied Poland, and who's still "The Master's" (aka, the vampire) acolyte. Eichhorst's job is to protect The Master from Abraham's attempts to kill him and end the infection.

Naturally Eph has a love interest (Mía Maestro as Dr. Nora Martinez), an estranged ex-wife (Natalie Brown as Kelly Goodweather), and a kid named Zach he wants to protect. He and Abraham eventually team up, joined by Vasiliy Fet (Kevin Durand), a former rat exterminator drawn into the fight for humanity.

The series works because it mixes B-movie gore with political and philosophical subtext, features characters we're interested in, and offers a unique telling of a familiar story. (46, 43 min-episodes.) Δ