Set in the stunningly beautiful Canadian Rockies, this British-Canadian crime drama created by Rowan Joffe (28 Weeks Later, The American, Before I Go to Sleep) focuses on new police chief Jim Worth (Tim Roth), who runs the tiny three-person department of the town of Little Big Bear, a seemingly quiet community that suddenly finds itself beset by violence connected to North Stream Oil, a huge oil company. 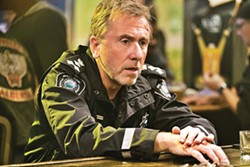 Worth has relocated from London with his family—wife Angela (Genevieve O'Reilly), daughter, Anna (Abigail Lawrie), and 5-year-old son, Peter (Rupert Turnbull)—apparently escaping a troubled and violent past as an undercover policeman, which we learn more about as the series continues.

The proceedings are further complicated by the Native American reservations of the Musqwa and Ipowahtaman First Nations, whose lands border the town and are considered sovereign. It doesn't take long for Worth to anger the First Nations leaders, and there's also a side story about potential environmental destruction connected to North Stream Oil.

The series wastes no time getting into the action, and in the very first episode, Worth and his family suffer a horrible tragedy. Wracked by guilt, Worth throws himself into a murder investigation he believes is tied to North Stream, but he soon succumbs to his alcoholism, which brings out his alter ego Jack Devlin, his undercover name from his London past. Suddenly the mild-mannered police chief becomes a real monkey wrench in North Steam's exploitive plans, and the series becomes increasingly violent as it leads to the end of the first season. Season 2 is apparently in the works.

A lot of the show's fun comes from the complicated relationship between Worth and his wife, as well as Worth's shape shifting hero/villain character. Eventually, Worth's daughter and Whitey spark a romance, which begins to tear the family apart. It's gripping drama, and Roth is terrific in the role. Likewise, Coopersmith's Whitey is a fascinating and complicated evil foil to Worth.

If you like a dark, moody drama, a sort of modern day Western with an anti-hero at the center, a kind of mix between Fargo and Breaking Bad, this may be the series for you! It'll grab you by the windpipe and not let go! (10, 60-minute episodes). Δ