Women get a bad rap for a lot of things, but specifically women are often characterized as the emotionally weaker gender that’s always about to cry when the slightest thing goes wrong.

In reality, most of the women I know have been hit with some pretty shitty things that would be enough to make anyone a crying emotional mess (think getting left by your significant other and having to raise the kids alone or having to sum up the courage to report your sexual assault to the police who may or may not believe you), and yet they still wake up, get out of bed, and live their lives. We don’t often see this woman depicted in television and especially not in comedy. We either get the ball-busting man hater or the gorgeous clumsy girl who just needs a good guy to swoop in and save her (I don’t know either of those ladies). 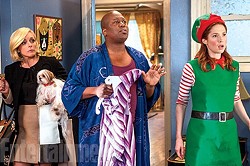 That’s why it’s so refreshing when a comedy goddess/real life woman like Tina Fey serves up a hilarious and real female character a la Kimmy (Ellie Kemper, formerly of The Office) in the Netflix Original Series, Unbreakable Kimmy Schmidt (which has already been renewed for a third season).

The show’s second season dropped on Netflix on April 15 and it did not disappoint. For those who haven’t seen season one, here’s the gist of Unbreakable: Kimmy, along with several other girls, is kidnapped near her home in Indiana by the crazy Reverend Richard Wayne Gary (John Hamm) when she’s in eighth grade. Kimmy and the girls spend the next 15 years in the reverend’s underground bunker, held captive as he tells them the world has ended and this is only safe place. This is where the show begins, with the girls being rescued by armed police officers as the local news media swarms in to interview nearby neighbors (complete with the show’s trademark theme song with an auto-tuned quote of neighbor saying “But females are strong as hell”). The question the show poses early on is how do you bounce back from something like that and go on with life as usual? It seems like a dark theme for a comedy, but Fey and company make it work.

After the girls get a makeover and interview on The Today Show, Kimmy decides to not go back to Indiana where everyone will always pity her for what happened 15 years ago. Instead, she starts a new life for herself in New York and the season closes with Kimmy triumphantly giving testimony that puts the reverend in jail for his appalling crimes.

In season two, the mole woman stuff (what Kimmy and the other kidnapped ladies are referred to) is still present, but it’s more in the background as our main character tries to navigate life and sort out her issues by seeing a therapist with a drinking problem (hilariously portrayed by Fey), getting her GED certificate, dealing with the fact that the man she loves, Dong (Ki Hong Lee) is in a green card marriage to another, much older woman, and searching for her mom (Lisa Kudrow) who didn’t even show up to greet Kimmy after she was rescued.

Happily, some of the show’s fabulous supporting characters get even more storyline and depth in season two. Titus Andromedon (Titus Burgess who also had a recurring role as a gay hairstylist on Fey’s hit comedy show 30 Rock), Kimmy’s gay roommate who aspires to be an actor, gets into a really meaningful relationship with a construction worker Mikey (Mike Carlsen, who incidentally also played a construction worker on 30 Rock), who is newly out of the closet. Jacqueline (Jane Krakowski, who also starred as Jenna Maroney on 30 Rock), Kimmy’s former employer and extremely vapid socialite friend becomes a little more human as she figures out life as a divorced single mom with no money, while also getting back in touch with her Native American roots. Meanwhile Lillian (Carol Kane), Kimmy and Titus’s landlord/fair godmother, attempts to fight gentrification in the neighborhood while the hipsters attempt to invade.

So grab yourself a bottle of Titus-approved pinot noir and get ready to binge watch season two of the hilarious Unbreakable Kimmy Schmidt. The wine just might help to steel your nerves when Fey drop’s a serious cliffhanger in the last second of the season finale. (13, 30-min episodes.)