Westworld—HBO’s new series based on novelist and filmmaker Michael Crichton’s 1973 movie of the same name—pulls off a nifty little trick: It aligns your sympathies more with the robots that populate the Old West amusement park than the human beings that visit it or the ones that run it.

The series focuses on guests William (Jimmi Simpson) and Logan (Ben Barnes), the former a first-time visitor troubled by the park’s more lascivious elements, the latter a park veteran who gleefully indulges every capricious whim. As the two are being outfitted before entering the park, good guy William chooses a white cowboy hat, bad guy Logan a black one.

There’s also The Man in Black (Ed Harris), an ultra rich guest who’s spent a lot of time at the park engaging in all manner of sadistic mayhem, and who believes there’s “another deeper layer” of the park that he’s determined to discover, to go “deeper into the game.” 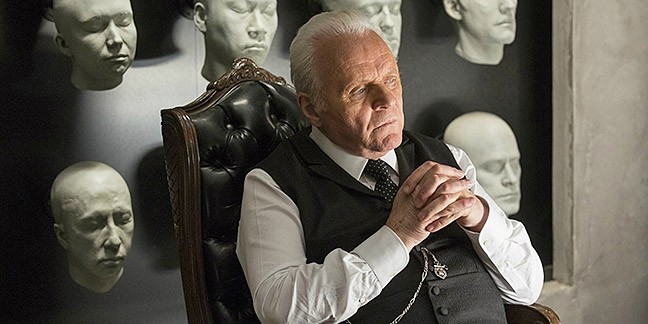 Characters like Dolores, programmed to be sweet natured and kind, stand in stark contrast to guests like Logan. When William asks Logan if one of the women he encountered who propositioned him with sex is real, Logan flippantly replies, “Well, if you can’t tell, does it matter?” Hence, we want the best for Dolores, but don’t really care much for Logan and his cynicism.

When the park’s hosts start experiencing glitches, we see behind the scenes and learn about creative director Dr. Robert Ford (Anthony Hopkins), who has programmed the hosts to experience “reveries,” past “memories” from previous characters they’ve played, which are supposed to make them act more lifelike … and they do, if by “lifelike” you mean conniving, deceptive, and violent.

The giant amusement park is safest near the center, but increasingly dangerous—at least for the bots—as you move outward into more criminal storylines, which is exactly where William and Logan go as the series continues.

Unlike the 90-minute film upon which it’s based, Westworld the TV series is able to delve more deeply into the story’s central conceits that explore human hubris, the limits of technology and our ability to control our creations, and morality and what people are capable of when they believe their actions have no consequences. Ah, but they do! Even in Westworld. “These violent delights have violent ends,” Dolores whispers to her programmer.

It’s an ominous promise that makes this series impossible to stop watching. (Six of the season’s 10, 60-minute episodes have been released so far.)