It's more than just a five-letter word to this volunteer 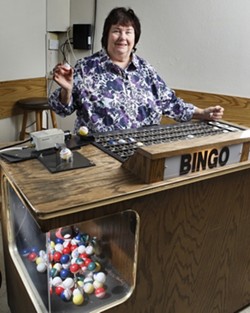 # "You have to have a thick skin to work here, Chrissy," explained Betty, the rosy-cheeked president of the Central Coast Senior Center. She smiled as she motioned for me to take a seat next to her, behind three folding tables pushed together that held all of the Bingo supplies anyone could ever need: game sheets for more than 10 different games played each night, daubers in several colors, Pull Tabs (akin to Scratcher Lottery tickets), raffle tickets, and wide, blue baskets given to players to hold it all.

Bingo isn't just a game. It's a serious passion and pastime for folks on the Central Coast--namely senior citizens. It's probably no surprise that during Bingo, there's absolutely no talking. No messing around. And no one even close to my age within a one-mile radius.

So how did I come to be at a Bingo game? Well, I enjoy volunteering. Whenever I can, I try to donate my time, efforts, and money to worthy causes. I usually find myself gravitating toward the elderly, and all their crusty, mysterious, and bejeweled ways (the older ladies have the best jewelry). They make me weep on the inside like nothing else, and along with giving the occasional homeless person a couple of wadded up ones, I dig hanging with the grumps and gramps.

But on this particular night at Bingo, I can't say I arrived out of a totally selfless interest to volunteer, or because I wanted to spend my evenings making sure players' numbers were legit. Dear readers, I'm now a writer with a record.

After a run-in with Officer "I have nothing better to do than arrest an upstanding, 20-something, boozy, blonde citizen standing outside of a bar in Arroyo Grande with no intention of driving," I held my head high as I avoided court and promised to serve time by serving my community.

I spent as much time as I could at the nondescript, stucco building. The 1,000-square-foot center consists of one room with a kitchen in the back, and sits near the Rock and Roll Diner in Oceano, under the Highway 1 bridge.

My "as much time as I could" was usually every other Friday night, 5 to 9 p.m. I referred to this as my "charity work" to anyone who wondered where I was, as if I was some rich Beverly Hills housewife planning her latest luncheon to benefit refugees.

My duties consisted of assisting Betty in any way she needed. I sold players Pull Tabs for 25 or 50 cents, counted money, re-counted money, called back the winners' numbers, and emptied the trash. I gossiped with Betty, and befriended many of the players, who were at times shocked, appalled, and genuinely happy to see me.

Some of the Bingo players were nice. Others not so much.

One of my problems--and points of contention with the players--was that I wasn't quick enough. This caused serious annoyance among some of the regulars as I ran from one end of the room to another with a winning play sheet in my hand, dauber juice staining my fingers. I read back the numbers, then forked over their cash, but I was never fast enough, and they made sure I knew it.

The sweetest and most tolerant Bingo player by far was also the most decorated, and maybe the youngest one there on any given night--when someone didn't bring along a son or daughter for playing company. She set up her table early, by 4 p.m. (the game didn't start until 6). There were little dolls superstitious items tons of daubers in shades of blue, red, pink, and green and even a fan for the occasional sultry Bingo night.

I learned a lot through watching her, and watching the game itself. Did you know that Bingo isn't just a single game in which you find a continuous line of numbers in a vertical, horizontal, or diagonal row? I didn't. There are many variations on the game, and just thinking about them now brings me back to a state of angst. There's the Warm Up, Crazy Kite, Stamp, Six-Pack, Six-Pack and a Stamp, Lightning, and Cover-All. The list goes on.

In addition to not being quick enough, I never got the reading order right. Betty always had my back, but the caller was never pleased. She reminded me of a lady truck driver.

"Chrissy, just read them back in order--right to left," she explained, in her flannel shirt and short-cropped hair.

Next week: "Chrissy, just read them back in order--left to right," she explained, in her flannel shirt and short-cropped hair.

I don't think I ever pleased her with my "calling back" skills.

There were often little arguments here and there about who won, how much they should have won, or what the last number called was--all mostly involving the players on one side and Betty and me on the other. It was all in good fun and part of the Bingo experience. It's a fast-paced, demanding, exciting, and addictive game. A serious game.

My time at the Senior Center gave me a sense of purpose. I felt good being there, being among friends--which I considered Betty to be. They appreciated my help, and I appreciated being appreciated. In fact, I donated my time many weeks after I finished paying my fine.

After 37 hours and more than $300 earned toward my indiscretion, I learned a few things: A thick skin goes mighty far. It's a basic necessity for life, whether it's in the editorial room at New Times, on the dating scene, or flipping through Vogue. Working with Betty at Bingo, I learned how to be a more grown-up version of myself, however much I wanted to act like just what I was: the child in the room.

You get a sense that everyone at Bingo--most are regulars at the Friday night games--feels the same way I do about showing up. It gives them a sense of family and purpose, because those small but important factors may not be in abundance in other parts of their lives.

If I didn't have Bingo, I might end up drunk outside that Arroyo Grande bar again, and that's the last place I want to be.

The Central Coast Senior Center is located at 1580 Railroad St. (south of the Rock and Roll Diner). For more information about the Senior Center and its Bingo games, call 481-7886.

Christy Heron deeply apologizes to all the people she tried to smooch at her office Christmas party. Forgive her at cheron@newtimesslo.com.