Birds of a feather

Check out these soaring sounds

You know how sometimes two performers find that there’s magic between them—some kind of mystical musical alchemy there’s no accounting for; it’s just there. That’s how it is with JT Nero and Allison Russell, the members of Birds of Chicago, an alt-folk duo playing two SLOfolks. 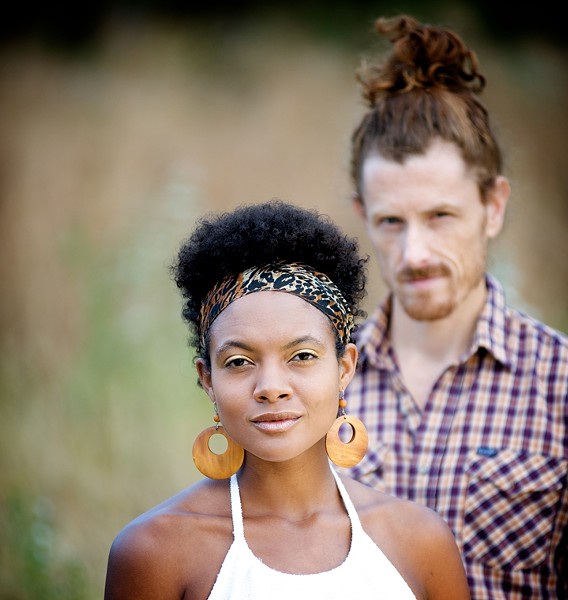 These two singer-songwriters—he the front man of the Chicago rock and soul band JT and the Clouds, she of the Canadian urban folk band Po’ Girl—just mesh together: beautiful voices, lilting melodies, soulful guitar, banjo, and ukulele picking. (Not to mention a little clarinet thrown in here and there.)

Nero lists Mark Twain and Sam Cooke as his biggest influences, and his poetic songs explore the lonely, the absurd, and the hopeful in a light country style that can move from the blue-eyed soul of a doo-wop street corner singer to a tent revival rock preacher.

Allison Russell can sound like a speakeasy chanteuse, an R&B diva, or a dainty Loretta Lynn. She’s also a terrific whistler. Her songs are unpredictable and often devastating.

SLO Brew kicks off its week on Thursday, Jan. 10, with a double header—a live music show with El Ten Eleven (8 p.m.; all ages; $10) with White Arrows opening, followed by a dance party with Las Vegas DJ Tina T to launch Red Bull Editions, new flavors in blueberry, cranberry, and lime (10:30 p.m.; 21-and-older). El Ten Eleven is an instrumental duo from L.A. that employs drums, bass, and looping technology. They were recently voted by Maxim as one of the 10 best instrumental bands and are touring in support of their newest album, Transitions. Get ready to dance! Opening act White Arrows is a psychedelic electronic pop quartet, also from L.A. As for Tina T, according to promoters of the event, she was “voted Las Vegas’s ‘Best Female DJ’ 2010 & 2011. With over 13 years of dues paid, Tina T has been able to seamlessly merge her underground hip-hop and turntablist background with the fast pace of mainstream pop and the forward movement of the indie scene. Her versatility and open format style of mixing top 40, hip-hop, ’80s rock, house, and electro has allowed Tina’s musical style to be defined simply by the audience she is playing for.”

On Sunday, Jan. 13, the Brew presents Stranger (7:30 p.m.; all ages; $8 presale or $10 at the door) with Arden Park Roots, Louder Space, and Natural Heights opening. From San Diego, Stranger blends roots reggae, rock, and jazz music delivered with socially conscious lyrics. Arden Park Roots is a rock-reggae outfit with funky style. Louder Space is a young SLO Town rock band with a new EP, Signs of Life. And Natural Heights is a reggae act with a positive vibe.

The Wheeland Brothers play Frog and Peach on Thursday and Friday, Jan. 10 and 11, to deliver their “Jack Johnson meets Sublime sound” that “earned them a slot at the 2013 OC Music awards for best live band.” The up-and-coming act will play the Cali Roots festival in Monterey this May alongside Slightly Stoopid, Rebelution, Collie Buddz, and Matisyahu. Check ’em out before they blow up!

Jody Mulgrew and the Skeleton Crew play the Otter Rock Café on Friday, Jan. 11, at 7:30 p.m. as a going-away party for their roadie Adam, who found a better job than carrying amps and being bossed around by Jody. The show is free, so come send Adam off in style. Jody will be interviewing anyone else who may want the job.

Cal Poly Music Department Chair and pianist W. Terrence Spiller performs an all-Beethoven benefit recital at 8 p.m. Friday, Jan. 11, in the Spanos Theatre on campus. The first half of the program will feature the Sonata in G major, Op. 79; Sonata in C minor, Op. 10, No. 1; and Sonata in E-flat Major, Op. 31, No. 3. The second half will be devoted to the “Appassionata,” the Sonata in F minor, Op. 57. Tickets cost $9 for students and senior citizens and $12 for the public. Proceeds will benefit the Cal Poly Music Department Scholarship Fund. Pricing includes all Performing Arts Center fees, and the PAC now sponsors event parking! Visit the box office or call 756-4849 for tickets.

Amazing guitarist-composer Goh Kurosawa brings his world music sounds to the Steynberg Gallery on Saturday, Jan. 12 (7 p.m.; all ages; $10; call 547-0278). Kurosawa compositions/improvisations conjure “soundscapes, images, memories, experiences, places, people, the future, and emotions,” according to his press materials. “Being well-traveled, it is not surprising to notice the various reflections of the globe while listening and experiencing his works on sound recordings or at live events. People have identified his style with musical genres such as creative music, acoustic, electric, bossa nova, jazz, folk, rock, flamenco, Latin, Balkan, classical, world music, experimental and beyond.”

Cal Poly’s Spanos Theatre will be host to the internationally lauded American String Quartet on Saturday, Jan. 12, at 8 p.m. to perform the second concert in their innovative Beethoven Cycle: a six-concert series over two seasons that features six different ensembles performing all 16 of Beethoven’s string quartets. “We want to continue to build the audience for chamber music through the presentation of The Beethoven Cycle,” said Cal Poly Arts director Steve Lerian. “This is a unique opportunity for Cal Poly Arts audiences to experience the intimate beauty of this music, comparing performance styles by six world-class ensembles. It promises to be a fascinating journey for all who attend.” Student and adult tickets cost $36 and $45, respectively. Visit the box office or call 756-4849.

The Famous Jazz Artist Series at the D’Anbino Wine Tasting Room in Paso Robles kicks off its 2013 season with alto saxophonist Lanny Morgan on Sunday, Jan. 13, with shows at 4 and 7:15 p.m. ($15 each, or see both for $20). Morgan’s recording credits stretch back to the late ’50s with such legends as Maynard Ferguson, Stan Kenton, and the Lighthouse all-stars. He’ll be joined by Dylan Johnson on bass and Colin Bailey on drums as well as series co-producers Charlie and Sandi Shoemake (piano-vibraphone and vocals, respectively). Call 927-0567 to reserve tickets.

On Sunday, Jan. 13, the Steynberg Gallery is host to improvisational alto saxophone master Pierre Borey at 7 p.m. His sound is described like this: “The music undergoes a constant change—continuous development. Simultaneously: starting, stopping. Interrupts. Erupts. Interacting intuitive energy/intense contemplation. Audible focus. A dotted silence questioning the ongoing. Hits the guts, at the same time welds wounds. Takes all under consideration. Then erupts again. Moves on at the moment it stops and starts all over again. Improvising: Music.” Sounds like some outside jazz awaits!