Birds of Prey delivers a blast of confetti violence

BIRDS OF PREY (AND THE FANTABULOUS EMANCIPATION OF ONE HARLEY QUINN)

Glen Harley Quinn was definitely the highlight of the mostly mediocre Suicide Squad (2016), so it stands to reason she'd wind up in a film of her own. Thankfully, Birds of Prey is the better film—a bonkers, confetti blast of grrrl power. It's loud, violent, colorful fun, but also silly, thin, and mostly superficial. Told from Harley's perspective, and with the sort of unreliable narration expected from a psychotic narcissist, the film moves back and forth through time as Harley periodically realizes she's gotten ahead of her story and has to go back in time on a side plot to set up what's to come. This fractured chronology makes the goings on a lot more interesting and chaotic, and the overall theme—women taking control in a man's world and creating their own path forward—is a welcome cultural artifact of the #MeToo era. Harley, of course, has gotten out from under The Joker (who we never see but certainly hear a lot about). Their breakup puts Harley in a tough position: Lots of people want her dead but are too afraid of The Joker to kill her ... or at least they were! Now she's got every grudge-holder in Gotham after her. Black Canary realizes her boss, Sionis, is a depraved misogynist, and her life hangs in the balance between being his new chauffeur and being true to herself. The Huntress is out to avenge her entire family, gunned down in a mob war, but is dismissed by society for her weapon of choice: a handheld crossbow. Finally, Detective Montoya does all of Gotham PD's hard work while her male co-workers and boss take the credit. This convergence of female anger at the patriarchy intersects with a vengeance in a final set piece that's totally insane. It's a big ol' mess of wacky fun.

Anna I'll admit that while Suicide Squad was fun in a crazy, over-the-top way, I had some reservations about promoting Harley Quinn as some sort of antihero. While I get the appeal of cute dual colored pigtails and kickass boots, seeing young girls dressed as Quinn squealing in droves toward the theater was pretty concerning for me. This is not the person to idolize—a "can't live without her man" reckless mess who worships her overlording paramour as a god. So when I heard the character was getting her own movie—maybe even more than one—my heart said "ugh." But I have to say that this flick avoided a ton of hemming and hawing around The Joker and Harley's very unhealthy relationship with him. While their breakup was the setup, and The Joker's lost protection provided the chaos needed to fuel this film's fire, it doesn't dwell on that storyline. Quinn is self-admittedly a bad person but a charming muse nonetheless. She's not a joiner; it's only by necessity that she lets people in. But we do see some bits of her day-to day, not-always-a-loony-mess life. The guy who makes her favorite breakfast sandwich; the old man who she lives above and calls Doc; her pet hyena, Bruce, that she fawns over—she cherishes the ones who stand by her even just a little bit because, quite frankly, the rest of the world is out to get her. I do have to give props to the costuming in this film too—Harley dons a rave girl jacket complete with shredded caution tape that I can't get out of my head. Glitter and grime meet in perfect balance all over this wildly imperfect character. 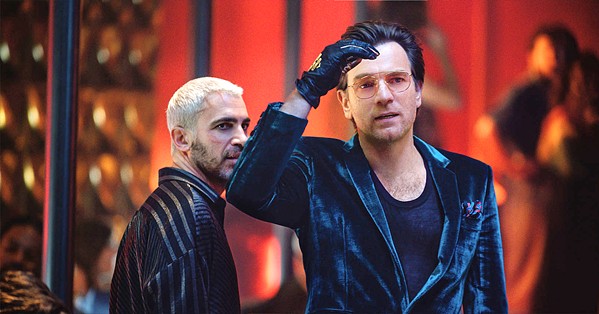 Glen Imperfect is right! Harley knows she's got moral failings—she's a trained psychiatrist, after all—but she's trying to be better. Life doesn't make it easy for her. When she tries to protect Cass, a pickpocket Sionis is after because she stole a diamond with bank codes hidden in it, the little girl turns out to be as stubborn and distrusting as Harley herself. Still, Cass thinks Harley is amazing: She's got her own apartment, she doesn't take guff from anyone, and she kicks butt. Should Harley be considered a role model? Hell no! She's out to save her own skin, but remember that Harley's the narrator here, so she gets to write her own story. Joining forces and working with Huntress, Black Canary, and Detctive Montoya is also anathema to Harley's personality. In fact, all four women are lone wolves. Come on, ladies! Hold each other up, don't tear each other down. Part of the film's message is learning to lean on one another and trust, and seeing as how Sionis is a very fierce adversary, they'll definitely need each other! I must say, McGregor seemed like he was having fun as Sionis—a glib, effete, insecure monster who thinks it's fun to watch his henchman Zsasz peel the faces off his enemies. Birds of Prey has been getting great reviews, but don't expect too much. It's fun but forgettable. If you're in the mood for an obnoxious distraction with a few good laughs and some over-the-top action, check it out.

Anna McGregor pulls off creepy here, as does Messina as his scarred-up henchman. Sionis is entitled and whiny, convinced his money should get him whatever he wants. The narration is pretty fun—it feels a bit like getting gab from the naughty girl in school. Harley Quinn is more ridiculous than relatable, but a wounded figure turned badass nonetheless. When she encounters anyone, a graphic of their name and grievance against Quinn pops up. It's a cute little shtick. I much prefer this badass bitch side of her character over the blighted lover that Suicide Squad featured. It's helpful that she's surrounded by strong women who all have their own crosses to bear and reasons for revenge. Huntress is especially fun—a trained assassin who's more than frustrated that everyone keeps calling her the Crossbow Killer. It's popcorn cinema to be sure, but fun and a little foolish—a perfect way to blow a couple of hours on a lazy weekend day. Δ