Bixby the dog and her owner thank SLO for the hospitality

You know Bixby. You’ve seen her black-and-white fur catching wind from the back of her owner’s bicycle as it zipped down Higuera. You’ve seen her wagging on the Kreuzberg Coffee patio, nudging a slobbery dog toy toward anyone interested in a good tug. Maybe you’ve even seen her at McCarthy’s Irish Pub, where the Border Collie mix managed to find a clever loophole around the “no dog policy.”

“She would peek her nose under the fence of the patio with a ball so that she could still play fetch in the parking lot,” said Mike Minnick, proud owner of the rescue dog. “She just wants to play.” 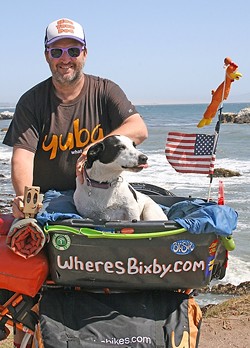 When Minnick embarked on his cross-country bicycle journey from his home of Austin, Texas, some two years ago, he never expected to stay in one place for very long. That prediction was pretty much right on the money. Well, until he and Bixby rolled into SLO in late February.

“I stayed in SLO more than twice as long as I’ve stayed anywhere else I’ve been,” Minnick said. “The community absolutely accepted us with open arms.”

I caught up with Minnick on May 12 in Pismo Beach; he was en route to a shelter in Santa Maria—and beyond that—wherever the wind blew him. The former bar manager told me he planned to return to SLO eventually, perhaps to even set down permanent roots.

In between stops at local animal shelters, Minnick and his 5-year-old shelter dog fell head over heels for SLO. The people of SLO fell just as hard. The Jouet family, including third-grader Kiki Jouet, welcomed the pair into their home.

“There are a lot of places that I really love that I’ve been, but SLO is different. In other cities, you may work every day so that you can take two weeks out of the year to come to a place like this,” Minnick said. “There’s a mentality here where people are already happy.”

The pair has now pedaled more than 8,000 miles through 31 states, stopping only for rest, a game of Frisbee, and to carry on their pro-rescue cause. They’ve ridden in a Mardi Gras parade through the streets New Orleans, sung “Happy Birthday” to an 81-year-old Willie Nelson in Texas, and skidded into SLO just in time to catch a surprise performance by Neil Young at SLO Brew.

“When I decided to leave my life behind in Texas in 2011, I was complacent—I’d been there eight years, and I was a chain smoker. I was unhealthy,” Minnick said. “My friend bought me a Burning Man ticket, and that was my catalyst. I thought, ‘Why not?’ I quit both my jobs and decided to take off.”

After meeting a band of bike-loving off-the-grid documentary filmmakers in the ghost town of Terlingua, Texas, Minnick mustered the courage to leave his broken-down truck and hop on a bike, dog in tow.

“My new friends were talking about the generosity of people they had experienced across the country,” Minnick said. “I had doubt as to whether I could do that, but I was so inspired. I knew this what I wanted to do. I wasn’t even thinking about raising awareness for a cause then. I was just thinking, ‘Can I get on a bike and ride across the country?’”

The answer to that question was a resounding “yes.” With his K-9-carrying Yuba Mundo bike laden with supplies, Bluetooth speakers (for jamming to music), solar charger, smartphone, and donated MacBook, Minnick has made his way through heat waves and hail.

“Doing this is the best decision I’ve ever made. I realized that I can have a platform and create change,” Minnick said. “I want to educate people, first and foremost. Foster a dog, donate food to a shelter, spay and neuter, adopt.”