Checking out the solar eclipse at Cuesta College

Catch ya next time

Bummed that you missed the 2017 solar eclipse? Word on the internet is there will be another one in 2024. Visit eclipse2017.nasa.gov for more info.

When I was in elementary school, one of my teachers told our class that the ancient Mayan civilization believed that solar eclipses were caused by a giant serpent swallowing the sun. 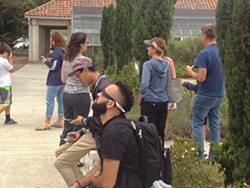 While I'm sure that my teacher went on to explain how eclipses actually work, at the time all I could think of was just how cool a massive, sun-eating space snake would be if it actually existed. It was clear to me that the Mayans, while lacking the technology to accurately find out what actually caused this amazing cosmic phenomenon, made up for the deficit with an explanation that was both striking and imaginative: a badass reptilian beast that sounded like some kind of crazy Marvel comic-book villain.

That and other popular eclipse myths rattle around in my brain on the morning of Aug. 21 as I walk up a narrow staircase to Cuesta College's Bowen Observatory on the San Luis Obispo campus. The small domed observatory, which sits atop the college's science building, is open to the public for the eclipse, giving visitors a chance to see the day's big show. Like pretty much everyone else in the country, I've been immersed in "eclipse mania" over the last week or so, reading about every aspect of the big event. The more bizarre stories include tales of shady grifters selling fake eclipse glasses that would burn the retinas right out of your head, as well as a gentleman in California who took to Craigslist to seek out someone to "help" him conceive a child during the eclipse.

But I leave unscientific notions of space serpents and eclipse babies at the door as I finish my climb to speak with Cuesta Astronomy Professor Patrick Len. The enthusiasm for this particular eclipse, he tells me, is partially due to the fact that it is a total eclipse versus a partial one.

"I haven't seen this much excitement for partial solar eclipses in the past," Len says. "But this one's the first total solar eclipse in the U.S. in quite a few years."

In between answering questions from curiosity-seekers and enthusiasts who'd made the trek up to the observatory and its 14-inch telescope, Len talks to me about some of the hard science behind the eclipse. The last total eclipse occurred in 1979. Since then, advances in technology have given both professional and amateur astronomers the tools to study, collect, and share data and observations that will help further our understanding of how the universe works. For example, Len explains how viewing the stars around the sun helped prove Einstein's general theory of relativity, a phenomenon that is difficult to observe unless there's an eclipse.

Being able to see how the sun's gravity distorts space and time is almost as cool, maybe even cooler, than a massive reptile slithering through the galaxy and swallowing stars. Touché, science.

But actually viewing the eclipse in SLO today is easier said than done. From the moment I arrive at Cuesta, the sky is crammed with slate gray clouds that show no signs of clearing up. Outside the observatory, adults and children sit fiddling with the protective glasses they'd been given upon arrival. Some mull driving farther inland or north up the Cuesta Grade to get a better view, but most stay in the hope that the obstructive weather would clear before the eclipse peaked around 10:30 a.m.

"What if there is some miracle and clouds just parted at the last minute," a woman in the group says.

By 10:25 a.m., the clouds are still as thick as ever, but the crowd outside the observatory remains cheery, many of them watching live streaming video from other areas of the country on their phones. I begin walking back to the parking lot, admittedly a little disappointed. But as I cross an open field around the back of the observatory building, I hear someone shout, "I see it! I see it!" and I quickly look up.

The clouds momentarily thin just enough to see a bright, white-hot crescent in the sky. Some of the children, many of whom had been getting antsy, call out excitedly.

Some of the adults cheer. We look up, staring together at a reminder of the awesome and powerful forces at work in our universe, diminishing our worries and fears for a moment to a microscopic blip in something far more immense and important. Δ

Staff Writer Chris McGuinness wishes Carl Sagan was still around. He can be reached at cmcguinness@newtimesslo.com, or on Twitter at @CWMcGuinness.