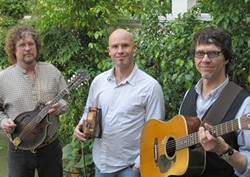 Listen to Little Black Train and you’ll hear the sounds of men coming out of a coalmine after a 12-hour shift, faces blackened, shirts drenched with sweat; you’ll hear the sound of a freight train barreling through the deep woods, hobos clinging to open cars; you’ll hear tales of gamblers and moonshiners, reels and jigs, soulful rootsy music that promises to transport you to another time and place.

The local trio will play in support of their debut CD Little Black Train: The Roots of Bluegrass on Fiddle, Mandolin, Mandola, and Guitar this Friday, April 23 at The Clubhouse (7:30 p.m.; $10).

The band (Kenny Blackwell, John Weed, and Stuart Mason), together since last August, took its name from an old-time gospel number that was the favorite song of Weed’s four-year-old son at the time.

“For regular fans, they should come out and hear our new material with my banjo,” said Mason. “And we’re working some old country blues into our sets as well, since bluegrass was greatly influenced by Southern blues. For those who haven’t heard us before, they may have heard Kenny around the county in one of his other bands, and of course John and myself in Molly’s Revenge. Little Black Train allows all three of us to kick some butt in an acoustic trio format, which is a fun alternative to our other bands. John and I still can’t believe that Kenny said yes to this project!”

Each of these three is amazingly accomplished, but something magic happens when they play together, their instruments swirling around one another like curls of smoke from a smoldering fire.

Settle back into the cozy environs of The Clubhouse and pretend you’re at an Appalachian house party. This is old-time music at its most riveting!

Downtown Brew has your dance card filled this week with seven shows over seven consecutive days. Let’s count ‘em down:

On Thursday, April 22, hear the soulful folk sounds of The Ragged Jubilee, a group of young upstarts who bring modern sensibilities to old-time sounds (7 p.m.; all ages; $8 presale or $10 at the door). Lakes will open.

On Friday, April 23, Timmy Curren performs live and there’ll be a screening of The Union Express, a new surf movie (7:30 p.m.; all ages; $10 presale or $12 at the door). Curren, a pro surfer, came late to music: “I tried for many years and I couldn’t get it,” he said. “When I was about 14, my dad bought me an acoustic guitar. And once I started playing, I got addicted to playing.”

On Saturday, April 24, check out the alt.rock of Central Currency (7:30 p.m.; all ages; $5). According to their bio, “Their sound is difficult to define but it’s rooted in blues, funk, and folk rock. Each song takes you to a different place—with 20-plus originals and a vast array of covers (by the likes of Jason Mraz, Johnny Cash, the Beatles, Dr. Dre, and more!). Alma Desnuda will open.

On Sunday, April 25, The RX Bandits bring their prog-rock and alternative to the club (7:30 p.m.; all ages; $13 presale or $15 at the door). Emerging in 1997 from Orange County’s thriving ska-punk scene, the band quickly began to make a name for itself as a unit willing to take musical risks and lyrical stances. The Mars Volta sibling band Zechs Marquise will open the show. The prog-rock groove quartet released its 15-track debut album Our Delicate Stranded Nightmare last August.

On Monday, April 26, hip-hop artist Murs brings his positive message (8 p.m.; all ages; $15). According to his bio, “Murs wants to be rap’s leader and spokesperson, the artist who helps give rap a credible face to fans, the media and critics. After all, the Los Angeles rapper is articulate and well read. He doesn’t use drugs and his platform consists of peace, love, unity and having fun.”

On Tuesday, April 27, reggae stars Katchafire hits the club with opening act Rebel Souljahz (7:30 p.m.; all ages; $17 presale or $20 at the door). New Zealand-based Katchafire is an all-Mouri band. After going huge in New Zealand (their debut album sold double platinum in their home country), they’ve been touring the world.

The Sherry Austin Band is probably new to local music fans, but well-known in places like the Sisters Folk Festival, the American River Music Festival, and The Kate Wolf Festival, where she’s been a favorite for the last few years.

With a tender voice and a penchant for penning sage heartbreakers and simple, soul-touching tunes, she’s blossomed into a terrific performer of her own original material as well as an amazing interpreter of Kate Wolf’s songs.

She describes her music as “gritty folk with a bit of twang,” and her two albums have received regular airplay from KPIG and many other stations. Her song “I Wouldn’t Lie to You” is featured on two compilations, and has been recorded by others, and she’s currently nearing completion of her third album, Love Still Remains, paying tribute to the late Kate Wolf.

The band includes Sharon Allen on harmony and lead vocals, Lisa Burns on bass, and Dorian Michael, a local favorite on guitar; they’ll be performing Kate Wolf songs as well as original material.

Tickets available at the venues for $20 or at Boo Boo Records or Cheap Thrills with service charge.

I predict The Sherry Austin Band will quickly become a SLO Folks favorite! Be the first to hop on board. 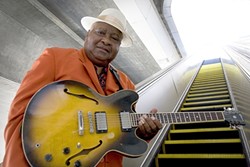 The SLO Blues Society’s got another hot show lined up for boogying blues fans this Saturday, April 24 when Arthur Adams plays the SLO Vets Hall with opening act The Amazing Stupifyers kicking off the fun at 8 p.m. ($20 at the door; 21-and-older; free dance lessons at 7:30 p.m.)

Musically, Adams can sound like his pal B.B. King, but vocally he resembles the tender-voiced Aaron Neville. Even though you may not have heard of him, if you’ve heard the radio in the past 30 years or so, you’ve no doubt heard him play. He was with Bonnie Raitt on Nick of Time (the record that won three Grammy Awards); he recorded five albums with the Crusaders including Street Life (which topped the Billboard jazz, R&B, and rock charts); and he has backed up B. B. King, Lowell Fulson, Al Jarreau, Nina Simone, Jerry Garcia, Lou Rawls, James Brown, and more.

Since moving beyond his work as a studio session man, Adams has recorded seven solo albums—his first was It’s Private Tonight in 1972. Most recently he delivered Stomp the Floor (Delta Groove, 2009).

From Russia with love

Natalia Kartashova, a Russian-born concert pianist who moved to the West Coast a few years ago, will perform two concert recitals featuring the work of Liszt, Haydn, Bach, and Muczynski on Saturday, April 24 at 3 p.m. in the First United Methodist Church in Santa Maria, and again on Sunday, April 25 at 3:00 p.m. in Trinity United Methodist Church in Los Osos. For tickets and info, call Olga Howe at 543-2261.

According to press materials, Kartashova was born in St. Petersburg where she began her music studies at age six with her mother, later graduating from the School for Gifted Children and Rimsky-Korsakov College of Music.

She was only eight years old when she gave her first concert in Russia, Hungary, Poland, and Czechoslovakia. By 13, she had represented her country on her first solo concert tour in Italy and had won several first prizes and two Grand Prix in piano competitions for young composers and pianists in the USSR.

This Thursday, April 22, Red Eye Junction plays unplugged at Native from 7 to 10 p.m. This show is free, all ages, and will featured more twang than any one person needs or deserves.

This Thursday, April 22, the Frog and Peach hosts a hot double bill—The Easy Leaves and Cuesta Ridge—starting at 7:30 p.m. You know all about how awesome Cuesta Ridge is, but Sonoma County-based The Easy Leaves may be new to you. The acoustic Americana duo sounds like a fight between a barroom hoedown and a roadside tent revival—they dare you not to stomp and caterwaul.

Cal Poly Music Department faculty members will present a recital titled “Strings, Cords and Keys” at 7:30 p.m. this Friday, April 23, in the Spanos Theatre on campus. Brynn Albanese (violin), Katherine Arthur (soprano), and Susan Azaret Davies (piano) will perform works by Johannes Brahms, Ernst Krenek, Astor Piazzolla, and others. Tickets are $6 for students and senior citizens and $10 for the public. Call 756-2787 to reserve yours.

Jody Mulgrew feels a little unloved, I think. “Hear for yourself what nobody’s been talking about,” he wrote me in third person last week. “Jody Mulgrew doesn’t have a publishing deal. He’s not being courted by the major labels. He’s never had his music featured on network TV, never opened for anyone famous, and he’s never won a prestigious song contest. In the words of his unofficial anthem ‘Everyone But Me,’ he croons, ‘Everyone but me got a lucky star in the night.’ Maybe that’s why he’s taking his act to the unincorporated outskirts of the county, where nobody cares that he’s nobody. See him perform at the Porch Cafe in Santa Margarita on Friday, April 23, at 7:30 p.m., aided and abetted by Tasha Powers (Threes and Nines) on upright bass, and hear for yourself what nobody’s been talking about.” We love you, Jody!

Check out the mysterious sounds of Matthew Montfort when he plays compositions from his most recent recording Seven Serenades for Scalloped Fretboard Guitar, at 8 p.m. on Friday, April 23 at the Steynberg Gallery when he opens for Montana Skies, an equally amazing acoustic duo that pairs cello and guitar for a haunting sound that explores everything from Pink Floyd to Bach. Tickets are $12 presale (547-0278) or $15 at the door.

Camozzi’s up in A-Town has a rip-roaring event for you this Friday, April 23, when The Castles, Bad Assets, and a new personal favorite, West Coast cowpunks The Sons of KD Elder bust out a night of high energy music. “We hope the place doesn’t go up in flames!” quipped a club rep.

Our local Earth Day celebration on Saturday, April 24 promises a terrific line-up of local talent. At 11 a.m., you’ll hear Zongo All-Stars deliver two hours of their original Afro-Caribbean and Cali-Cubano tunes. Then from smooth to swing, the show continues with Honeyguide, Impromptu, and the Red Skunk Jipzee Swing Band, which will keep Mission Plaza rocking until 5 p.m.

The Band Of Pirates play this Saturday, April 24 at the Fuel Dock from 3 to 6 p.m. A fun loving band, they mix rock’n’roll, R&B, a little bit of country, some reggae, and covers by Pat Benatar, Stones, and more.

Chet Baker! Stan Getz! Frank Sinatra! Now that I have your attention, this Sunday, April 25, pianist Terry Trotter (who’s worked with all three of the aforementioned superstars) will play the Hamlet in Cambria for the next Famous Jazz Artist Series concert. Charlie Shoemake (vibes), Chuck Berghofer (bass), Colin Bailey (drums), and Sandi Shoemake (vocals) will also be on hand. There’s a $15 4 p.m. set, a $12 7:15 p.m. set, or see both shows for $20. Call 927-0567 for reservations.

On Monday, April 26, the Steynberg Gallery plays host to Charlie King and Karen Brandow at 7 p.m. “They’re an extraordinary folk music team,” said event organizer Dennis Apel. They’re also musical storytellers and political satirists whose repertoire covers a century and a half and four continents. The cover is $10.

UK-based Boyd & Wain have a trio of shows throughout the county this week starting with a Monday, April 26 free 6:30 p.m. show at Paso’s Senor Sancho’s. On Tuesday, April 27, they’re the featured performers at the Steynberg Gallery’s weekly “Songwriters at Play” showcase (6:30 p.m.; $5), where up to eight performers will deliver original music. Then on Thursday, April 29, they’ll play Santa Margarita’s The Porch at 7:45 p.m. They’re touring to support the release of their new album, Ain’t No Fairy Tale. This is homegrown and rootsy toe tappin’ folk music featuring terrific songwriting and great fiddlin’.

Glen Starkey is fresh out of witty, self-deprecation. Help him out with an insult for next week at gstarkey@newtimesslo.com.