Black Widow is action-packed spectacle with a touch of soul 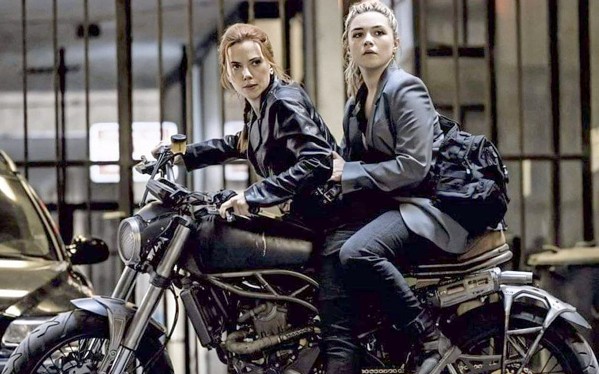 Cate Shortland (Lore, Berlin Syndrome) directs this film about Avenger Natasha Romanoff (Scarlett Johansson), aka Black Widow. The story takes place chronologically after the events of Captain America: Civil War (2016) but before Romanoff's death in Avengers: Infinity War (2018). Romanoff is on the run, forced to deal with a conspiracy with ties to her past as a spy. To fight the forces aligned to bring her down, she must deal with her broken relationships with her family members, sister Yelena Belova (Florence Pugh), father Alexei Shostakov (David Harbour), and mother Melina Vostokoff (Rachel Weisz). (133 min.)

Glen This film is admittedly a guilty pleasure—outlandish and unrealistic—but a helluva fun ride! It begins with a flashback of young sisters Natasha (Ever Anderson) and Yelena (Violet McGraw) living the American dream in Ohio with their parents when their father, Alexei, "gets the call." Turns out they're Russian sleeper agents meant to return to the motherland while the agents of S.H.I.E.L.D. are in hot pursuit. It's a great opening set piece! The film's villain is Dreykov (Ray Winstone), who runs "The Red Room," a secret facility where "Black Widows"—highly trained female assassins—learn their trade. It was bad enough when they were merely brainwashed, as Natasha and her mother, Melina, were, but Dreykov's scientists have found chemical means of mind control, rendering his Black Widows completely devoid of free will. The film is an extended adventure as Natasha goes on the hunt for Dreykov with the help of her old "family," which was never a "real" family, right? One of the film's ongoing themes is what constitutes family, and that question gives the film its emotional heft. I should be too old for this comic book nonsense, but I have to admit, I love this stuff!

Anna The string of Marvel films detailing each Avenger's storyline can feel pretty tired for me personally, but you're right—this was a pretty fun ride. It is, of course, over the top and wildly silly, but there's enough humor and kickass action to keep it rolling. Pugh is a nice addition to this superhero world; her Yelena is sarcastic and hardheaded and a great wing-woman for Johansson's Natasha. It's still Natasha's story, but thanks to the cast of their forced family, it comes off as much more of an ensemble piece. The two women use a helicopter to bust Alexei from prison in an epic and very superhero-summer-blockbuster way, with guard towers going down and Natasha swinging wildly around on a rope to scoop him up. You won't be falling asleep in this one—it's overstimulation from minute to minute! There will inevitably be another Black Widow film in the future, and at some point I'm sure the storylines and plot will get eye-rollingly bad, but this first film was actually a pretty fun watch—even for someone like me who doesn't consider themselves a superhero super fan.

Glen It helps that it's very funny. The banter between Natasha and Yelena is especially playful in that "I know every button to push" way siblings have with one another. For instance, Yelena makes fun of the way Natasha poses when she's fighting: "You're such a poser." Likewise, Alexei is hilarious in his determination to relive his super-soldier days. "It still fits," he says after squeezing into his Red Guardian costume. He also thinks he's the reason for the success of "his girls": "You both have killed so many people. Your ledgers must be dripping, just gushing red. I couldn't be more proud of you." The four of them eventually realize that their three years posing as an American family made them a real family too. "The best part of my life was fake," Yelena says. Black Widow is something of a villain in other Marvel films—a ruthless and remorseless assassin. Here she's humanized. If she's ruthless and remorseless, it's because Dreykov and his Black Widow programming made her that way. She's here to save herself, her sister, and all the young girls Dreykov has called "trash" that he's "recycled" and given "purpose." Sorry, Dreykov, but not on Natasha's watch!

Anna Winstone's Dreykov is so slimy and gross; he definitely pulls off the role of a hated villain. There's also a mysterious masked henchman who has the ability to mimic her enemy in combat who we learn has a special vendetta against Natasha. I definitely enjoyed the "family" dynamic between the four characters—from snarky and argumentative sisters to the proud papa whose misplaced pride is odd but endearing and the mother who chides her daughter not to slouch. I know this flick is available through Disney Plus with an upcharge, but a film this heavy on action is meant to be seen on the big screen at least once. I've read that execs were so impressed with Pugh that there are plans to bring her into future MCU films, perhaps even as the next Black Widow. I'm here for it—she was a total hit for me! It's a fun summer superhero flick, a perfect excuse to beat the heat for a couple of hours and hang out in the theater. Δ